The Gammaizers (ガンマイザー, Ganmaizā) were a group of 15 deities that protect the Gamma World. Having protected the safety of the Gamma world for centuries, they soon decided to participate in the Demia Project, taking the physical form of Adel.

The Gammaizers were created by Edith long ago as a means of preventing the Great Eye's power from being over-used. Upheaval! The Magistrate's Decision! They took the form of sacred pillars within the praying room of the Royal Gamma Family. Adonis, or rather, the Grand Imperial Majesty always recites a sacred prayer to them in exchange for the safety of his citizens. Explosion! Paint From Your Heart! With the Gamma World losing the power to sustain itself, Adonis' doubts kept him from using the Eye to wish their world whole again. Upheaval! The Magistrate's Decision!

Warning the Ghost Hunters of a coming invasion of the human world by the Gamma in 2005, Sennin guided Ryu Tenkuji into assembling 15 luminaries to be reincarnated as Ghost Eyecons, knowing that they would be needed to counter the 15 Gammaizers. Reminiscence! Secret of the Mind!

When the "invasion" finally came ten years later, the Gammaizers initially shown no interest in the Gamma's Demia Project, but after Adonis was dethroned and Adel took over the leadership they decided to obey him. Conspiracy! Adel's Trap! One of them made its first move by forcefully assimilating with Jabel and forcing a transformation into Gamma Ultima Fire to confront Kamen Rider Ghost Grateful Damashii, sensing him as a threat. Despite its immediate defeat, the gammaizer returned to its original spot while Jabel regained his senses, leaving him horrified from the event. Intimate! The Giant Eyecon!

When Takeru is about to summon the Great Eye via the Heroic Eyecons to make another wish, the Gammaizers prevent this by sending a backlash wave of energy through the Monolith in the Daitenku Temple. Disaster! The Red Sky! Soon, the Gammaizers introduced themselves to Adel, and together they cooperated to eliminate every obstacle that could halt the Demia Project, including Adonis and Takeru. One of the Gammaizers accompanied Adel to confront Takeru and Alain, and eventually transformed into it's real form, Gammaizer Fire. Do-or-Die! Ready for Infiltration!

Gammaizer Fire launches an attack at Takeru but is saved by the 15 heroic eyecons which proceed to transform into Ghost Grateful Damashii form. It easily overpowered the rider until Ghost summons Nobunaga Damashii to make a diversion and escapes with Alain. Gammaizer Fire becomes a formidable force and managed to withstand attacks from Specter and Necrom. Gammaizer Fire teleported to the Human World with a group of Gamma Assault and Gamma Superior to continue its attack after Necrom fleeing Gamma World with Specter and Ghost Grateful Damashii. It was finally defeated when Makoto uses the Deep Specter Eyecon. However, it is later revealed that its pillar safely returned to the praying room. Bursting! Power of the Depths! Gammaizer Fire is later deployed by Adel to eliminate Alain after watching a scene of Necrom fighting a group of Gamma Assault and Gamma Superior in a warehouse and easily defeated the rider. Gammaizer Fire was defeated by Ghost Grateful Damashii, Deep Specter and Necrom's Triple Rider Kick after the appearance of Makoto and Takeru to save Alain. Forever! Cries of the Heart! It is later revealed that Gammaizer Fire survived the attack and having its pillar safely returned to the praying room. Bizarre! Power of the Gammaizers!

Gammaizer Gravity was summoned in the prayer chamber by Adel alongside Gammaizer Time, but remained largely inactive, simply displaying its earthquake-causing power while Gammaizer Time sends turquoise energy bursts out through an eye portal that cause adults to regress to children in body, mind, and memory. The attack also affect modern buildings as it will turn into a classic, smaller version of itself. Bizarre! Power of the Gammaizers! Its effect is reversed when Ghost Grateful Damashii summons and uses the power of Tutankhamun's. Reminiscence! Secret of the Mind!

Gammaizer Wind is then deployed to analyze the threat levels of the three Riders. Ghost and Specter, with Mugen Damashii and Deep Specter, are determined to be high-level threats, while Necrom is deemed a minimal threat. Furious! Idol's Declaration! Gammaizer Wind tells Adel of the Great Eye and its power, revealing that the Gammaizers are there to prevent it from being used. It then attacks Takeru again, but is destroyed by Ghost Mugen Damashii's Shinnen Impact. Learn! All the Ways!

To obtain access to the Great Eye, Adel merges with the 11 remaining Gammaizers. He confronts Takeru to see Mugen Damashii's power and deploys all of the Gammaizers, but Takeru uses Ghost Grateful Damashii and summons the 15 Heroic Ghosts; matching with their counterparts, and despite being outnumbered, the Gammaizers easily win, never leaving their Adel doppelganger forms. They then merge with Adel into his Perfect Gammaizer form, showing itself strong enough to block Ghost Mugen Damashii's God Omega Drive kick. Resurrection! Hero's Soul!

Alia, not liking Adel's recent actions, tries to stop him as Kamen Rider Dark Necrom Pink. Gammaizers Planet and Climate are deployed and easily stop her, but a deflected attack hits the pillars of Gammaizers Blade and Magnetic, fusing them into Gammaizer Magnetic Blade, which deploys itself to study conflicting human emotions, reported by the others as a bug it developed. It switches its mind into Mayu Natsume, moving her mind into her father's body, and his mind into its body. Opposition! Father & Daughter! After their minds are switched back, it tries to absorb the father for more data. Eventually Gammaizer Magnetic Blade was being restrained by Musashi Damashii and Houdini Damashii before Billy the Kid Damashii frees Shinichiro. It is then stopped by Ghost Mugen Damashii's Isama Shoot/Flash with the Gan Gun Saber and the Sunglasseslasher, splitting Gammaizer Blade and Magnetic back into their pillar form and destroying them. Courage! Tragic Resolution!

Edith tries warning Adel that the Gammaizers, whom constantly evolve to be stronger, have shown interest in human emotion, and may start becoming self-aware at this rate, but Adel ignores him. After Edith is outed as a traitor to the Gamma, he reveals to Takeru and the others that the Deep Specter Eyecon gains its power by drawing from the Gammaizers. Adel tries but fails to connect to the Great Eye, Gammaizer Climate reporting that Takeru "is the key". This leads him to attack Ghost with Climate and Planet, summoning Arrow and Rifle as well. Upheaval! The Magistrate's Decision! Necrom Sanzo Damashii lets the Riders escape, but Adel soon attacks with Climate and Planet again, mistakenly thinking he defeated Ghost. Adel attacks again, but the results are disastrous; he summons Gammaizers Hammer, Arrow, Spear, Rifle, and Climate and Planet in turn, but each is quickly destroyed by Ghost Mugen Damashii's power, and even Adel's Perfect Gammaizer form is bested. Only Gammaizers Electric, Oscillation, and Time remain as the final three surviving Gammaizers. Astonishing! Hermit's Truth!

However, Adel gains a new resolve: to create utopia, he will become the world, and this resolve lets him connect to the Great Eye, whereupon he resurrects all 12 destroyed Gammaizers. Copy Makoto that Makoto has been fighting were created by the Gammaizers due to his use of the Deep Specter Eyecon, and they now make a new, "complete" copy, who "is" the "real one". Connect! Genius Juvenile!

All Gammaizers are briefly summoned by Adel for preparation for Demia. Upon Demia's activation countdown, Gammaizers Fire and Wind occupy the Riders until it is triggered. Traced to the server base, Fire and Wind are defeated. However, Adel arrives to become Demia's conduit. Activate! Terror of Demia! He briefly faces Ghost while wielding Gammaizer Blade, but retreats after their minds overlap. Gammaizer Climate wishes to continue studying Takeru, who has now surpassed humanity, but Adel orders his destruction. Alia warns again that the Gammaizers are gaining sentience, but is ignored. Makoto tries using the Deep Specter Eyecon to connect to the Gammaizers and take control, but only connects for a second; meanwhile, the Gammaizers use their power to create another Deep Specter Eyecon for their perfect Copy Makoto. Takeru tries connecting with Adel again, but is blocked; intercepted by Gammaizers Fire and Planet, instead of destroying him, they try to determine the source of his power. Told of peoples' feelings, they retreat, now strong enough to block one of Ghost Mugen Damashii's finishers. Later, Planet, Climate, and Fire reappear to analyze Ghost's power again to further their evolution, but are defeated after Deep Specter and Necrom arrive to aid Ghost. Horrible! Disappearing World!

Gammaizer Planet, Climate and Fire resurrects and retreat back to Gamma World. Gammaizer Planet re-affirm that Takeru "is the key" with Fire wanting to assimilate him to accelerate their evolution while Climate suggested that Makoto is another possibility to aid with their evolution and orders Copy Makoto to investigate the secret on how humans are able to convert emotion to power. Gammaizer Liquid, Climate and Wind appears before Takeru at the rooftop taking the appearance of Yuki, Sonoda and Nagamasa respectively by taking over their minds to find out the secret behind Takeru’s evolution. Gammaizer Climate attempts to capture Takeru by trapping him in the magic barrier but saved by the appearance of Deep Specter. Gammaizer Wind and Liquid is curious how Makoto is able to see Takeru as he is in a state of data with Climate confirming that both Takeru and Makoto are the key and all 3 Gammaizers are summoned forcibly back into the Gamma World by Adel. He reprimands them for not following orders to dispose Takeru and his friends and deem their evolution is unnecessary before summoning the remaining 12 Gammaizers that they don’t need sentience as he "is the world". Gammaizer Fire, Liquid, Climate, Wind and Planet appears in Bills’ company studios to eliminate everyone and defeated by the combination effort of Mugen, Deep Specter and Necrom. However, all 15 Gammaizers appear again and launch out attacks all at once at them.Duel! Words from the Swordsman! All 15 Gammaizers merge back into Adel after he launches out attacks at Mugen, Deep Specter and Necrom.Conciliation! All Resolutions!

Gammaizer Fire and Liquid appears to attack Takeru and his friends for intruding into the Gamma World and destroyed by combination effort of Makoto and his copy. All 15 Gammaizers are summoned by Adel to counter 15 Damashii Parka Ghosts summoned by Takeru but easily defeated by them. After Adel renounces his evil ways, the Gammaizers forcibly fuse with him into the Perfect Gammaizer form, with Takeru having no choice but to defeat it, sacrificing Adel in the process. The Gammaizers appear to be destroyed; however backups of them were stored in the Deep Specter Eyecon from Copy Makoto, allowing them to regenerate. The Gammaizers later fuse with the Great Eye, along with the combined form of Frey and Freya, to form the Great Eyezer.Gather! Chain of Grief!

Upon Great Eyezer’s defeat by Takeru and 15 Damashii Parka Ghosts, all 15 Gammaizers are permanently destroyed.Infinity! Power of Humanity! 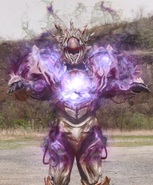 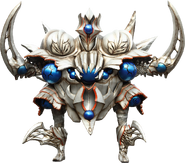 Great Eyezer without its Parka 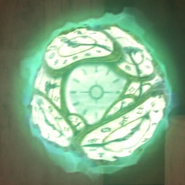 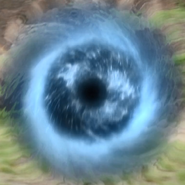 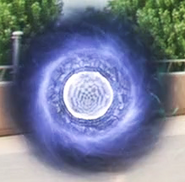 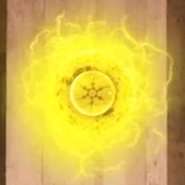 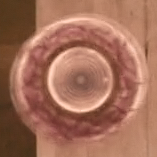 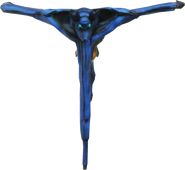 In the borrowed form of Adel, the Gammaizers are played by Akihiro Mayama (真山 明大, Mayama Akihiro). Their voices, however, are provided by Sayaka Ohara (大原 さやか, Ōhara Sayaka), though Akihiro took over for their voices after Sayaka left in episode 34, in order to signify the Gammaizers' constant evolution.[1] Sayaka would later return to voice them in episode 47 as part of their resurrection.