This is a category associated with the final villain of every Kamen Rider series. Most often they are monsters, but occasionally they are Kamen Riders. They are usually also leaders of the series' villains that play a major role in the plot, but others are introduced in the final episodes of the show. Sometimes an unrelated or minor villain is fought in an epilogue after the main threat was defeated in the finale.

Starting in Kamen Rider Wizard, it has become a common trend to have a major antagonist defeated in the penultimate episode or series finale, and another, less significant monster fought in the last episode, which serves as an epilogue.

Drive not only follows the finale-epilogue trend, but it also has two final villains in its official finale, as Heart fought Shinnosuke after the two teamed up to defeat the Sigma Circular. It is also the only series to have three final villains, though the one fought in the epilogue is a common enemy.

V3, X, and Hibiki are the only series aside from Drive to have multiple final villains. 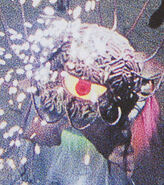 The Man and Woman

Super Apollogeist
Add a photo to this gallery

Another Decade
Add a photo to this gallery

Monk-themed Bugster Viruses
Add a photo to this gallery

Xaviax
Add a photo to this gallery