"From this day forth, we will be known as Faust! Those who don't know better may think our actions are acts of the devil. However even if our hands are soaked in blood, we will turn this country into what it has the potential to be!"
―Gentoku's proclamation at Faust's founding[src]

The organization is eager to use the extraterrestrial technology of the Pandora Box to produce more weapons such as the Smash monsters. According to Gentoku, one of Faust's objectives is to create the "Ultimate Lifeform," hence their experiments with the Smash organisms, which turned out to be finding suitable candidates (whose Hazard Level is higher than 2) for the weaponized Rider System.

The organization was effectively disbanded after Gentoku Himuro became the new prime minister of Touto, making the organization not useful to him anymore, as well as Soichi Isurugi's defection to Hokuto.

However, it is later revealed that Evolto has rebuilt the Faust in Hokuto to help investigating Hard Smash. The Forbidden Item

In Kamen Rider Build NEW WORLD: Kamen Rider Cross-Z, Evolto revealed that the true purpose of Faust's founding was to raise Ryuga Banjo's Hazard Level so he would become strong enough for Evolto himself to absorb and regain his true powers.

In a legendary tale familiar to both Evolto and Gentoku, Professor Faust made a pact with the demon Mephistopheles to gain power, but at the cost of his soul. Prologue: NIGHT ROGUE RISES

What would be known as Faust began in 2015, seven years following the Sky Wall Disaster. Gentoku Himuro, director of the Touto Institute of Advanced Matter Physics, took a secret cabal of scientists to continue the Nebula Gas research of Takumi Katsuragi. Though he had officially suspended Katsuragi's research from the Institute, Gentoku offered him a place in his secret group.

Claiming to have been sent by the CEO of Namba Heavy Industries Ltd., astronaut "Soichi Isurugi" offered his services to fulfill Gentoku's wish to use the power of the Pandora Box to dominate Japan. "Isurugi" soon proved his worth to Gentoku by murdering Koji Hotei; though an old friend of Gentoku, his pacifist ideals and plans for Touto threatened his agenda. Realizing that "Isurugi" was his "demon", Gentoku named his organization Faust. Provided with the Bat Fullbottle and Transteam Gun, Gentoku transformed into Night Rogue for the first time.. Prologue: NIGHT ROGUE RISES

Nariaki Utsumi/Night Rogue
Add a photo to this gallery

Stretch Smash (Sawa Takigawa)
Add a photo to this gallery 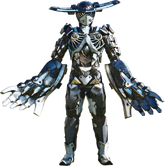 Flying Smash Hazard
Add a photo to this gallery

Guardian
Add a photo to this gallery

FausTube is evidently the video archive of Faust. Gentoku Himuro had himself filmed demonstrating the transformation into Night Rogue for FausTube. Night Rogue Chapter

FausTube's name is a clear allusion to the video streaming service YouTube.