An Advanced Roidmude (上級ロイミュード, Jōkyū Roimyūdo) is any Roidmude that has evolved beyond their Low-Class Roidmude forms into a unique Evolution State (進化態, Shinka-tai). Once a Roidmude evolves, they are generally referred to by the motif of their new bodies, rather than their Core's numbers (with 001 being an exception). Most of these motifs are of inanimate objects.

Later on, Roidmude 001/Freeze Roidmude creates new, red-colored Neo Viral Cores, which allow humans with darker hearts to synchronize with a Roidmude and combine with them into a single Fusion Evolution State (融合進化態, Yūgō Shinka-tai), in which the human host gains the power of the Roidmude, while the original Roidmude speaks through their chest where his/her number plate emerges. If a Rider is able to remove the human from the fused form, the Roidmude would revert into its Low-Class form and, if it survived the separation, would require a replacement Neo Viral Core to re-fuse with the human. The Fusion Evolution State is determined by the human host, meaning that if the Roidmude synchronize is killed, the host can partner with another Roidmude to re-assume it. Roidmudes who have already achieved their normal or Super Evolution can also use Fusion Evolution, with their power increasing the Fusion's ability, as demonstrated by Brain Roidmude when he partnered with Mitsuhide Nira to become the second Thief Roidmude.

Seven Roidmudes have achieved 'Advanced' forms through other, less conventional means. The first was Proto-Zero, who served as Kamen Rider Protodrive, the first Rider to fight the Roidmudes. After Chase was captured and reprogrammed by the Roidmudes, this technology was adapted into the Brake Gunner, transforming him into a unique psuedo-Rider warrior called Mashin Chaser, who possessed the structure of an Advanced Roidmude. After regaining his memories and returning to the side of the Special Investigation Unit, Chase forsook his Mashin Chaser form to become a Rider again, Kamen Rider Chaser.

given to him by Kyuemon Izayoi

, also becoming an honorary Shocker monster in the process.

Roidmude 077 achieved evolution through another unique method. Through the use of a Gaia Memory, 077 was able to evolve into a Dopant, namely the Beast Dopant, which is of a different monster type from Roidmudes. Technically, this method of evolution would make 077 a Roidmude-Dopant hybrid.

Prior to achieving his Supreme Evolution form, Paradox copied Eiji Tomari's data and stole the Drive Driver from him, allowing him to become Kamen Rider Dark Drive. An alternate timeline version of Paradox was summoned by Swartz to copy the data of his former Time Jacker underling Ora and received an Anotherwatch to become Another Drive.

Through amplifying the chosen emotions they've acquired, Freeze, and later Brain (by performing a Fusion Evolution with Nira), Heart and Medic, are able to access a Super Evolution State (超進化態, Chō Shinka-tai), which are more powerful versions of their standard Advanced Roidmude form, indicated by a golden body with a personal color pattern. Roidmude 108 achieved a similar state by merging with his past self. Such an evolution is termed by himself as a Supreme Evolution (超絶進化, Chōzetsu Shinka). In appearance, it's similar to the other Super Evolved Roidmudes and he bears a golden body as well.

Upon gathering four Super Evolutions, the Roidmudes will achieve their goal, the Promised Number. Other Roidmudes, including Tornado (before his destruction) and 006 (who was suppose to unlock his evolution as an Advanced Roidmude before his Core was extracted and destroyed by Tenjuro Banno in Banno Driver form), were also known to be actively seeking Super Evolution. But after Banno took over 006's body and transformed into Gold Drive, he became the fourth one to "achieve" Super Evolution-like ability and plans to occur the second Global Freeze by gather all four Super Evolved Roidmudes giving their powers to activate the Sigma Circular in exchange for one Roidmude as a sacrifice, which Medic originally became a vessel for the sacrifice until Brain sacrificed himself to save her. After Brain's death, Banno/Gold Drive reveals his true intention as he is planning to reset the Global Freeze but unlike the first one (which affected only the quarter parts of East Asia), this time it will affect most parts of the world. 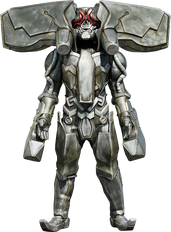 (108) Paradox
Add a photo to this gallery

(Tenjuro Banno) Gold Drive
Add a photo to this gallery

Heavy Acceleration
The signature ability of the Roidmude is to somehow slow down the movement of surrounding objects', including that of humans, with their unaffected consciousness aware of their impass during this time. One can be protected by the Heavy Acceleration effect by carrying Shift Cars or Signal Bikes on their person.
Advanced Camouflage
Roidmudes can generate disguises through film-layers around their body that function similar to the cerebral cortex.
Data Mimicry
Roidmudes can transform their bodies into data to travel within the electricity/cyberspace while in their Core modes. They can as well temporarily morph their bodies into data to easily phase through solid objects.
Motif Powers
Advanced Roidmudes gain a whole different set of powers and/or abilities tied to what their theme is, meaning no two Advanced Roidmudes are alike.

It seems that Advanced Roidmudes still have signs of what they had looked like as a Low-Classed Roidmude incorporated into their designs.