Neverending Story
Castle Doran (キャッスルドラン, Kyassuru Doran) is Kiva's base of operations which is of the Wyvern-like Doran Race (ドラン族, Doran Zoku).

Though originally called the Great Wyvern (グレートワイバーン, Gurēto Waibān), the Fangires captured it and bonded it to the mold of a castle so it would serve as the base of the Checkmate Four. Wataru eventually became its master through Kivat from his mother Maya. While dormant, it assumes the form of a tall building to conceal itself in plain sight, invisible to ordinary people.

When exposed to moonlight, or when Kiva performs his finishing move or uses the Doran Fuestle, Castle Doran awakens and assumes its true form. Due to its unique abilities of sealing defeated Fangires, Castle Doran is home to the Arm Monsters, who are in now servitude of Wataru while being maintained on the Life Energy of the sealed Fangires that Castle Doran devours. In battle, Castle Doran can use Magic Missiles (マジックミサイル, Majikku Misairu), firing the towers on its castle, and spit out Pod Shoots (ポッドシュート, Poddo Shūto) from its mouth. It can also breath fire as well as drain the life energy of others. It also seems that when its offspring, Shoodoran, joins onto its back, Castle Doran`s wingspan increases thus allowing it to fly faster. Similarly, when King landed a Six Pillars Sabbath on its back, sending tendrils throughout and across it, its power increased as it became enraged with sharper teeth and fell under King's control.

Castle Doran also possesses the power to transcend time and space, first showing the ability in Kamen Rider Den-O & Kiva: Climax Deka when aiding Kiva, Den-O and Zeronos in the battle against the Nega DenLiner. Castle Doran can use this very same power in the form of the Time Door, which is rarely used as it would summon or send any person from or into any moment in the past, serving as a bridge between the two timelines of 1986 and 2008.

It took part in the Rider War dream that Natsumi Hikari had, flying alongside Psyga, Riotroopers with Flying Attacker jetpacks, and large Madder Hawks, with Kamen Riders Kiva and Ryuki standing atop it. It was quickly shot down and crashed into a mountain. 「Rider War (episode)」

During the 14 Heisei Kamen Riders' battle against Amadum's monsters in the World within the Magic Stone, when various giant and flying monsters appeared, Kiva boarded Castle Doran, fighting alongside the other Riders pulling off their various tricks and attacking Cancer Supernova by breathing fire. 「Neverending Story」

Summoned by the Goriders, the Castle Doran is part of a team of five Kamen Rider and Super Sentai mecha which wipe out the Xevious fleet, allowing the Goriders to destroy the mothership Andor Genesis with the Rider Hurricane. 「Kamen Rider × Super Sentai: Chou Super Hero Taisen」

A somewhat sleepy creature, Castle Doran has a personality of its own. While its original personality is unknown, it seems that years of servitude to the Fangires have caused Castle Doran to become unstable without a master or caretaker for it. This is shown when the King of Fangires was defeated, thus causing Castle Doran to go rampant until the Arm Monsters intervened. It was also shown that Castle Doran has (or had) no qualms on killing an innocent human as it drained Otoya`s life energy when commanded by its former master. It seems that having the Arm Monsters and Wataru has changed it for the better though, as it helped Kiva fight Fangires and Six Pillars Sabbaths later on. It should also be noted that Castle Doran seems to care for its offspring as shown when both of them appeared together in the series.

Wataru's Doran Fuestle is inherited by Kamen Rider New Kiva in 2031. 「Finale: The Inheritors of Kiva」 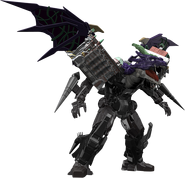