The Card Decks (カードデッキ, Kādo Dekki) in Kamen Rider Ryuki, also known as Advent Decks in Kamen Rider: Dragon Knight, are special card decks used by the Kamen Riders to transform and battle in the world behind the mirrors. They contain the Advent Cards, which allow the Riders to access a wide range of abilities.

Functionality in Both Series

Card Decks/Advent Decks allow holders to sense the presence of Mirror Monsters and see into the Mirror World/Ventara. They are initially equipped with a Seal Card and a Blank Contract Card. When inserted in a V Buckle, can change the owner into a Blank form Kamen Rider (Ryuki/Dragon Knight and Ouja are the only ones seen with Blank forms). To become stronger and obtain more cards, the owner must use the Contract Card to form a contract with a Mirror Monster. Each Deck has different weapons and abilities based the Rider's Contract Monster/Advent Beast. All Decks include an Advent/Attack Vent Card that summons the Contract Monster and a Final Vent in which the Rider and Contract Monster do a combination attack. Besides these cards, there are different categories of Advent Cards, e.g. Sword Vent, Strike Vent, Guard Vent, or Shoot Vent, that multiple Riders have their own versions of. Some Riders also have cards exclusive to them, like Freeze Vent, Spin Vent, and Nasty Vent.

When a user transforms into their Survive/Survive Mode form, their Deck changes color (i.e. Ryuki/Dragon Knight and Knight/Wing Knight's Decks turning from black to red and blue, respectively), increasing the Rider's power, giving them new Visors, and allowing access to new and stronger cards.

The Card Decks were created by Shiro Kanzaki, with 13 of them being created and given out to individuals to become Kamen Riders, though only 10 appeared in the series' prime continuity. They begin blank, only gaining their golden emblem after Contracting. Any person can transform into a Kamen Rider as long as they possess an Card Deck. As such, the Decks can be handed over from one user to another without any restriction, as shown with the Ryuki, Raia, and Zolda Decks, and with Knight's in an alternate continuity. If an Card Deck is destroyed, the Rider immediately loses all their powers, and the contract made with the associated Contract Monster is broken as well.

Hideyuki Kagawa created the two Alternative Decks, which were a variation of the original Card Decks made from his photographic memory of their design specs.

In the main series' continuity, the Scissors, Gai, Raia, both Alternative, Imperer, Zolda, and Odin Decks were or appeared to be destroyed, with the Tiger, Ryuki, and Ouja Decks losing their user and becoming otherwise lost or left behind. After everything was undone by Shiro and Yui changing their past, the Card Decks were rendered to have never existed. In the movie, the Ouja and Ryuga Decks were destroyed, while Femme's was lost, Zolda's abandoned, and Ryuki and Knight's survived; the others' fates are unknown, but were likely destroyed. In the special, the Scissors, Verde, Gai, and Ryuki Decks were destroyed, with Raia's being unspecified but lost regardless; in the alternate ending, the same was true before they were all erased, but reappeared.

The Advent Decks were created by Eubulon while he was in Ventara. Originally, only 12 of these Decks were created, and they were given to the 12 best warriors of Ventara. These Decks were DNA-locked, meaning that only the Riders themselves or individuals with similar DNA could use them. Xaviax took advantage of this key point when he gave the Decks to the Ventaran Riders' Earth counterparts. However, Eubulon is able to reassign the Decks to another user's DNA, as shown when he handed the Siren Deck over to Maya Young.

Due to a filming error, Kit Taylor is once shown to have cards used by his Survive Mode in his deck many episodes before his actual Survive Mode Card is introduced. In the video game, however, a Rider's normal cards become their Survive cards when they enter Survive Mode; it's unknown if this game mechanic is meant to be canon to the series.

Eubulon also possess his own Advent Deck known as the Void Key, which he uses to access the Advent Void, though he had to repair it first sometime after he was reactivated. The Void Key can also be used to free a vented Rider from the Void's stasis pods, though doing this eventually drains the Key of its energy, and some time is needed for it to recharge before Eubulon can enter the Advent Void again.

Eventually a 13th Deck known as the Onyx Deck was created by Eubulon and given to Kit Taylor after he was rescued from the Advent Void, as the Dragon Knight Deck had been reclaimed by its original user at the time. After Adam retired from being a Kamen Rider, the Dragon Knight Deck was given back to Kit with Onyx being returned to Eubulon, but it's unclear what if anything happened to it after that.

All of the Advent Decks remain intact at the end of the series.

In the World of Ryuki, a unique Card Deck not seen before was under the possession of Kamata, allowing him to transform into Kamen Rider Abyss. It is not known how this Deck was created, but it was likely made the same way as the other Decks in the A.R. World and given to the planted Kamata through Narutaki's meddling. 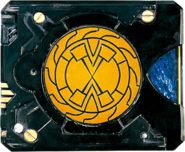