TBA (Ghost)
Full list of appearances
The Captain Ghost (キャプテンゴースト, Kyaputen Gōsuto) is Kamen Rider Ghost's personal vehicle, resembling a pirate galleon with red eyes and a mouth on its hull, as well as reptilian legs coming out of its sides. It is summoned by Yurusen on Ghost's behalf. If the Captain Ghost combines with the Machine Ghostriker, they can transform into the Iguana Ghostriker.

Yurusen again summons Captain Ghost so Ghost can form Iguana Ghostriker in order to engage the Insect Ganma after it became giant. Fast Shooting! Legendary Gunman! With the Iguana Ghostriker ensaring the Ganma with its tongue, Ghost soon enough defeats it with his Omega Drive (Ore). Activate! Another Monolith!

The Iguana Ghoststriker was summoned by Ghost and combined with Kamen Rider Drive's Ride Booster Set during their battle against the Renaissance Gamma, with the two Riders using the formation to outmaneuver the behemoth before destroying it with their respective Rider Slash attacks. Kamen Rider × Kamen Rider Ghost & Drive: Super Movie Wars Genesis

Ghost enlists Captain Ghost's services when he and Specter are facing a trio of Gundari on their respective bikes. Forming the Iguana Ghostriker, Ghost engages a Gundari only to be knocked off and taken by another one. The Iguana Ghostriker eventually manages to destroy its Gundari on its own as Specter and Ghost manage to defeat the remaining Gundari with their Omega Drives as well. Magnificent! The Mysterious Eye!

When the Planet Ganma takes off into space, Yurusen summons Captain Ghost which takes Ghost Ryoma Damashii out of Earth's atmosphere, allowing him to catch up with and destroy the Planet Ganma. Superb View! The Earth's Dawn!

Ghost (Toucon Boost Damashii) later asks Yurusen for Captain Ghost when Jabel fuses with a Gundari. However, Yurusen is swatted away by Jabel, leaving Specter to deal with him as Houdini Damashii. Anguish! The Stubborn Escape King!

Yurusen had Captain Ghost take Takeru's friends off the Island of Eyecons before it dissolved. Kamen Rider Ghost the Movie: The 100 Eyecons and Ghost's Fateful Moment

Despite the presence of legs protruding from it, the Captain Ghost is able to fly much like a phantom ship.

When combining into the Iguana Ghostriker, the Captain Ghost makes up the majority of the formation, where the hull opens up and becomes the iguana portion, while the Ghostriker forms the spine of the formation. 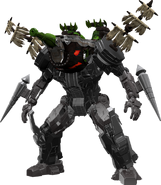