A trio of Buzzstingers (Hornet, Wasp, and Bee) first appear to target Mika, the only survivor of their attack on an ocean liner after being saved by Asakura to be used by him in order to feed his monsters. The trio used the "Trinity" attack to counter any Final Vent attack until they were all killed by Ouja's Veno Crash, Knight's Hishou Zan and Zolda's Gigalauncher from all three directions at once. Their essence was soon devoured by Venosnaker, Metalgelas, and Evildiver despite the prevention attempts from Darkwing owing to Dragreder's interference. Another pair of Buzzstingers (Broom and Frost) appeared in episode 37 to target Eri after she came out of her coma, but were destroyed by Knight and Ryuki Survive's Final Vents.

Buzzstingers Hornet, Wasp and Bee were among the monsters in the World within the Magic Stone. They accompanied their master Amadum as he attempted to seize the young Haruto and Koyomi as well as the Rider Rings they carried. However, Haruto Soma used the Bind Ring to restrain Amadum and his monsters as he used Rings provided by Kosuke Nitoh to escape with the children and the Fourze Ring.

The Buzzstingers did not appear again, even as the fourteen Heisei Riders joined to wipe out the monsters before ultimately Amadum himself was destroyed. Neverending Story 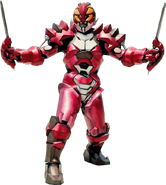 Buzzstinger Frost
Add a photo to this gallery

Retrieved from "https://kamenrider.fandom.com/wiki/Buzzstingers?oldid=673637"
Community content is available under CC-BY-SA unless otherwise noted.