The Bike Transforming Build Phone (バイク変形 ビルドフォン, Baiku Henkei Birudo Fon) is Kamen Rider Build's personal smartphone and one of his inventions.[1] It can also transform into the Machine Builder Rider Machine by utilizing the Lion Fullbottle.

The Build Phone, like regular smartphones, is equipped with mobile apps. 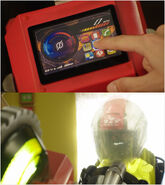 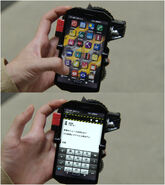 Build Phone's Email app
Add a photo to this gallery

The Build Phone consists of the following parts:

The Machine Builder (マシンビルダー, Mashin Birudā) is the vehicle mode of the Build Phone.[3]

The Machine Builder is equipped with GPS navigation and is equipped with High Balancer Tires (ハイバランサータイヤ, Hai Baransā Taiyasu) that have a multi-directional air injection system. This allows the bike to remain perfectly balanced and at full speed can run up and down slopes, the sides of buildings or the Sky Wall. The Front Gear Light (フロントギアライト, Furonto Gia Raito) on the handle bars is equipped a high beam headlight along with thermal and infrared sensors to see enemies in the dark or in hidden areas. The Front Gear Light can also extend outward for combat use, rotating at high speed like a buzzsaw and using an unnamed Rider Break attack to ram right through objects or a large enemy such as the Guardian Union State mechas. The Guard Red Cowl covering the bike is made from a special armor material that is super durable and protects the internal components of the bike from damage, able to withstand any attack by a Smash. The Machine Builder's seat cushion is automatically adjustable to provide its occupants with a comfortable ride and adjusts to negate some of the force of impact from rougher travel on uneven terrain, during a battle or from high jumps.

The Rear Bottle Charger (リアボトルチャージャー, Ria Botoru Chājā) draws power from the enlarged Lion Full Bottle to maximize output allowing the bike to achieve explosive bursts of speed. It can also create a saw blade energy construct by Build going at full speed and executing a wheelie. The front tire then begins to glow in a golden aura that transforms into a saw blade to slice obstacles or targets. Technology of Destruction

The handlebars and throttle have a computer system that allows the Machine Builder to read the user's driving ability and habits, then optimizes performance to better be utilized by whomever is driving it. The bike can also use its phone apps for various functions, including a cell phone, radar and materializing helmets for the driver and a passenger to wear using a built in touch screen display.

In episodes 29 and 30, Build uses an unknown Fullbottle to insert in the Build Phone due to the fact that the Lion Bottle was in Blood Stalk's possession.

Retrieved from "https://kamenrider.fandom.com/wiki/Build_Phone?oldid=671417"
Community content is available under CC-BY-SA unless otherwise noted.