Encroaching on a battle between the first eighteen Heisei Riders and numerous monsters, Sougo Tokiwa assumed the BuildArmor before proceeding to seemingly wipe out all combatants. This act was witnessed by Sento Kiryu, the original Kamen Rider Build, who had been transported to the same location as a result of experiments he had conducted with the White Pandora Panel. Kamen Rider Build: Be The One

During Another Build's attack on Kamen Rider Build and Cross-Z in 2017, Sougo used the Build Ridewatch given to him by Sento's future self to try to protect the timeline and defeated Another Build. But as a side effect, Sento reverted mentally to Takumi Katsuragi and his powers were erased from time. Best Match 2017

On September 17th, Zi-O assumed the BuildArmor to fight alongside Geiz DriveArmor against Another Ex-Aid. Soon after, Zi-O performed the Vortex Time Break alongside Geiz's Time Burst to defeat Another Ex-Aid. However, it was at that point that Emu Hojo arrived and transformed into Kamen Rider Ex-Aid Action Gamer Level 2, proceeding to attack Zi-O and Geiz. Doctor Gamer 2018 The fight was interrupted when the Time Jacker Ora arrived and, having paused time, refreshed Ida's Ridewatch and allowed him to become Another Ex-Aid, resulting in Emu losing his Kamen Rider identity and associated memories as Another Ex-Aid ejected all parties from the Game Area. No Continue 2016

On October 5th, during a fight against Another Fourze, Sougo dropped the Build RideWatch when he attempted to activate it. But, before he could use it, Geiz snatched it and activated his version of the BuildArmor. After the fight, Geiz gave the RideWatch back to Sougo. Switch On! 2011

On October 21st, Zi-O assumed the BuildArmor and performed the Vortex Time Break to temporarily neutralize Another Wizard, causing Kosuke Nitoh to briefly regain his memories of fighting alongside the original Kamen Rider Wizard as Kamen Rider Beast. Beauty & Beast 2012

On October 27th, Sougo used the BuildArmor when he was challenged by Geiz, outraged at his decision to follow Kuroto Dan as a member of the Dan Foundation. Having grown experienced as both Zi-O and in the BuildArmor, Sougo was able to overwhelm Geiz's default Rider form before performing the Vortex Time Break to defeat him as Geiz was forced out of his transformation. Genm Master 2016

Following the appearance of Another Quiz, Geiz, intending to defeat the Another Rider without erasing the memory of Kamen Rider Quiz, clashed with Zi-O. In a battle mirroring their prior confrontation, Geiz assumed BuildArmor and performed the Vortex Time Burst to force Sougo out of his transformation. Final Answer? 2040

Facing a second Another Build, Zi-O assumed BuildArmor and performed the Vortex Time Break to defeat Another Build, only for the Another Rider to immediately switch to the form of Another Ex-Aid, proceeding to overwhelm Zi-O. Seeing Sougo in a pinch, Woz spirited him away to safety. Another Zi-O 2019 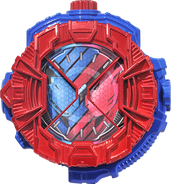 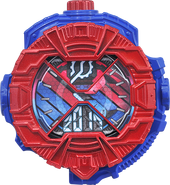