Breaking Mammoth (ブレイキングマンモス, Bureikingu Manmosu) is a mech created by Hiden Intelligence incorporated into Zea with the ability to detach and travel to Earth while the satellite's core remains in orbit. It was originally designed by the previous president, Korenosuke Hiden, for use in large-scale rescue operations, but was later re-purposed for use by Kamen Rider Zero-One in battle. It is summoned by the Breaking Mammoth Progrisekey. Both Zea and Breaking Mammoth were transferred to HIDEN Manufacturing and were set by Izu to make them follow its real law to follow only Aruto Hiden after the event of the Workplace Competition.

Breaking Mammoth can also be activated without its Progrisekey by Astronaut-type Humagears like Ikazuchi, which was used to destroy Zea's Satellite Bus when it was acquired by Ark.

Zea detaching the Breaking Mammoth unit, preparing it for teleportation to Zero-One's coordinates

Breaking Mammoth is composed of the following parts:

Using the data gathered by Yua Yaiba, ZAIA Enterprise and A.I.M.S. developed the Giger to neutralize Magia by connecting them with the Gigers' own private network. MetsubouJinrai.net attacked the A.I.M.S. headquarters where the Gigers were being built and Jin secretly used a Zetsumeriser on at least one before MetsubouJinrai.net withdrew after procuring an Attache Shotgun and the Attache Arrow and defeating Valkyrie. MetsubouJinrai.net would later use the Giger to hack the hospital's private network and the Humagears. Yua would later ask the help of Aruto and Izu to counter the out-of-control Giger by giving the cracked Mammoth Zetsumerisekey with the Giger blueprints. Izu, through Zea, noticed a similarity with Giger's design matching that of a blueprint that was installed in Zea by the previous president, Korenosuke Hiden, intended for Zero-One's use in mass-scale rescue operations. Combining the two sets of data, they made the Breaking Mammoth Progrisekey and Zea reactivated their own version of Giger: Breaking Mammoth. 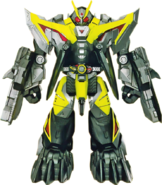 Zero-One Breaking Mammoth
Add a photo to this gallery

Ikazuchi (untransformed)
Add a photo to this gallery

Breaking Mammoth Progrisekey (Open)
Add a photo to this gallery

Breaking Impact (Step 6: Explosion and caption)
Add a photo to this gallery

Retrieved from "https://kamenrider.fandom.com/wiki/Breaking_Mammoth?oldid=684712"
Community content is available under CC-BY-SA unless otherwise noted.