This weapon is exclusive to Type Next, in a similar vein to Drive's Tire Specific Items. Dark Drive can use this weapon as either a sword, a gun, or a brass knuckle-like weapon.

Blade Gunner's finisher is an unnamed Rider Slash: Dark Drive presses the Igniter on his Shift Brace and executes a powerful energized slash. 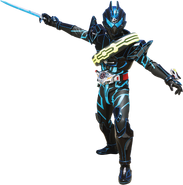 Dark Drive summoning the Blade Gunner from his chest