16 years ago, shortly after the Y2K crisis, Masamune Dan was alerted by his son Kuroto to the first instance of the Bugster virus, appearing as a glitch on Kuroto's laptop. Unaware to anyone, Masamune would infect himself with the virus, with the goal of developing the ultimate antibody within himself. 「Chasing the Mystery!」 「Judgment Received!」

Later, when Kuroto Dan resurrected his own father, Saiko Yaotome was able to extract Black Parado from Masamune's body, much like original Parado was extracted from Emu Hojo. He became the pawn on Kuroto's and Saiko's plans and gained human DNA via Create the Bugster! game mechanics.

Soon after, Saiko and Tsukuru presented the Bugvisor G to Emu Hojo and Poppy Pipopapo. Enlisting Parado, actually the Black Parado, and Poppy as participants for the experiment, Saiko had them fitted with neckbraces sporting the gauges which indicated their progress in clearing the game. While leaving the Black Parado to play with Emu, Saiko conducted her experiment with Poppy personally.

Later Emu had been sent to hospital as a result of injuries inflicted by the Black Parado. Returning to the Next Genome Institute, Saiko left Parado to the mercy of his counterpart before joining Kuroto at his residence where Poppy was contained. Black Parado battled his counterpart and easily finished off the battle with a Perfect Knock Out Critical Bomber.

As Saiko revealed to Poppy, her true goal in creating Let's Make a Bugster was to restore Game Disease victims through the sacrifice of Bugsters; as Poppy and Black Parado were respectively derived from Sakurako and Masamune Dan, their genetic codes would be combined to restore Kuroto Dan's human body. However, the restoration of his humanity was a ruse Kuroto fabricated to manipulate Saiko.  Nevertheless, Black Parado had by this point reached the power of a genius gamer and was retrieved by Kuroto Dan's Gashacon Bugvisor II. Kuroto subsequently injected Black Parado's virus into himself, gaining the power he needed to create God Maximum Mighty X. 「Kamen Rider Para-DX with Poppy」

Black Parado appears, still backed up in the Gashacon Bugvisor II, Masamune was revealed to possess Black Parado, which was the reason behind his power as Cronus. Later, Masamune was able to break out as his power bursted and fended off a Zombie Gamer. He took the Buggle Driver II containing Black Parado and became Cronus once again, though he later passed it on to Kiriya Kujo after Genm defeated him. Black Parado was likely absorbed back into Masamune Dan's body in order for him to become Cronus once more.  「Kamen Rider Genm vs. Lazer」

Kamen Rider Another Para-DX is a playable character in Kamen Rider Buttobasoul. 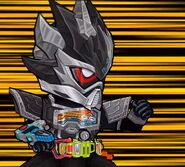 Another Para-DX is a black and gray palette swap of Para-DX Level 99, but keeping the eyes and rider gauge the same.

Kamen Rider Another Para-DX has the following parts: