Kamen Rider Fourze the Movie: Everyone, Space is Here!

Kamen Rider Fourze the Movie: Everyone, Space is Here!

Unlike the Kyodain, Black Knight relies more on more defense than offensive attacks due to his strong armor. Black Knight is armed with a rapier called the Blackest Leaver (ブラッケスト・リーバー, Burakkesuto Rībā) and a machine gun built-in to his chest. 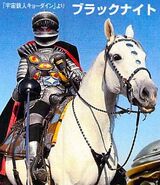 The original Black Knight
Add a photo to this gallery

Retrieved from "https://kamenrider.fandom.com/wiki/Black_Knight?oldid=541156"
Community content is available under CC-BY-SA unless otherwise noted.