The Birth CLAWs (バース・CLAWs（クロウズ）, Bāsu Kurōzu, Cannon/Leg/Arm/Wing System) is an armor system that consists of six armaments contained in Receptacle Orbs on the Kamen Rider Birth armor, created by Doctor Maki as part of the Kougami Foundation's Medal System. Using a unit requires a Cell Medal as payment for it to emerge and attach to the Recepable Orb it came out from. Furthermore, the Birth CLAWs are magnetic and thus attract Cell Medals to them. Kamen Rider Birth can also use two or more CLAWs units at once by inserting in more Cell Medals into the Birth Driver. If one of the weapons is damaged, it has to be taken to the Foundation for repairs. 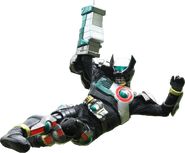 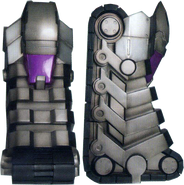 In the non-canon Kamen Rider OOO Allstars: The 21 Leading Actors and Core Medals net movie, Kamen Rider Birth is shown to summon ingredients of oden from the Receptacle Orbs.

Kamen Rider Birth·Day (仮面ライダーバース・デイ, Kamen Raidā Bāsu Dei) is the powered-up form of Kamen Rider Birth when all six Birth CLAWs units are summoned and attached to Kamen Rider Birth at once. Becoming Birth·Day requires six Cell Medals, it can be done all at once or by summoning one Birth CLAWs at a time. Birth·Day can also perform a powerful attack called the Cell Bash (セルバッシュ, Seru Basshu), where the Breast Cannon fires a powerful energy blast without the expenditure of any Cell Medals. Likely drawing residual energy from the other CLAWs units.[7]

TBA (OOO)TBA (Movies)
TBA (Specials)
Full list of appearances
When the six Birth CLAWs units combine, they create the CLAWs·Sasori (CLAWs・サソリ, Kurōzu Sasori), an autonomous scorpion-like assault droid which has its master server and network connection installed in the Birth Helmood. Summoning it requires 1,000 Cell Medals - however, its power output is sufficient to even drive off Kazari, which Birth is normally unable to do. The CLAWs·Sasori can move freely across water and burrow underground, even with a passenger such as OOO. It can also split apart into its components and reform to create the illusion of being destroyed. Offensively, the CLAWs·Sasori is capable of extending both of its arms and its tail on tethers like the combined Crane and Drill Arms and can utilize a Cell Burst-like attack which fires an array of various colored lasers from the tip of its stinger.[8]