Big Sister and Little Sister (姉と妹, Ane to Imōto) is the twenty-seventh episode of Kamen Rider Wizard. It is the concluding part of a two-part arc introducing Mayu Inamori, the twin sister of Medusa's Gate identity, Misa.

When it is discovered that Mayu is the twin sister of Misa, the girl who has become Medusa, Mayu makes it her mission to seek out the one part of her sister that is still alive within Medusa, even though Haruto believes it is better to save Takako first.

Overpowering Kamen Riders Wizard and Beast, Medusa turns her attention to Mayu and assume her original self's form before taking her leave with Rinko holding Mayu from following her. Later, as Nitoh and Shunpei take Takako to her home to keep an eye on her, Mayu is taken to Omokagedō to cope with the new turn of events. The next day, as Mayu receives a text message and leaves in secret, Haruto is informed that Gremlin has appeared to attack Takako.

By the time Kamen Rider Wizard arrives to put the Phantom at a disadvantage with Kamen Rider Beast, Gremlin reveals that Mayu is a Gate and that Medusa has lured her to the house her family lived in. As Wizard Hurricane Dragon and Rinko fly towards them, Mayu is fooled into believing that Medusa is Misa as the Phantom tricks her into giving her the keepsake and revealing that seeing their family again gives her hope.

Having now what she needs, Medusa explains that the real Misa has long died and that she murdered Mayu's parents before crushing the keepsake to begin the birth of Mayu's Phantom just as Wizard and Rinko arrive too late.

Haruto fights Medusa, but the Phantom proves to be too strong and prevents him from using the Drago Timer before using her tentacles to complete drain his magic, intending for him to give in to despair at being forced to watch Misa do so. Mayu's Phantom is seconds away from being born as Medusa watches on. However, remembering Misa's words that only she decides how it starts and ends, Mayu suppresses her Phantom to Medusa's shock and the White Wizard appeares to drive her off. The White Wizard then turns his attention to Mayu to offer her the chance take revenge for her family as his apprentice, the girl choosing her new beginning as a magician. 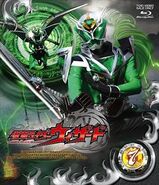 Retrieved from "https://kamenrider.fandom.com/wiki/Big_Sister_and_Little_Sister?oldid=509234"
Community content is available under CC-BY-SA unless otherwise noted.