Battle Hopper (バトルホッパー, Batoru Hoppā) is a living motorcycle used by Kamen Rider BLACK. It was created by Gorgom, made specifically for the upcoming Creation Kings Black Sun and Shadow Moon. When Kohtaro Minami was ambushed by the members of Gorgom during his escape, he drives Battle Hopper and finally got away from Gorgom headquarters. Battle Hopper has the ability to heal its own wounds if damaged, and can stand on its own if knocked over. His special move is the Dynamic Smash, a body slam attack that is executed at full speed. Before the finale, because Battle Hopper is connected to the Kingstones, it was controlled by Shadow Moon due to this connection until Black used his Kingstone Flash to disconnect the two. After taking heavy damage and suicide ramming itself towards Shadow Moon, it thanked Kohtaro for everything and seemingly died. It then reappeared in Black RX due his strong connection to Kohtaro's Kingstone which caused it to be resurrected as Acrobatter in response to the Sun Kingstone's evolution.

Suzuki RH250
Acrobatter (アクロバッター, Akurobattā) is the revived version of Battle Hopper. It is now capable of speaking coherent Japanese and often has conversations with Kohtaro. Whenever BLACK RX transforms into any of his two other forms, it does the same.

Battle Hopper was introduced in the 7th chapter of the 1988 Kamen Rider Black manga. It was created by a motorcycle manufacturer named Daimon, who was a fan of the original Kamen Rider series and created the bike as a pet project. (Which is both ironic and meta as a Kamen Rider exists in this universe too.) The bike is depicted as being sleeker than its TV counterpart and has a 2,000cc motor with an internalized computer. 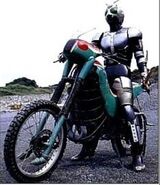 Shadow Moon while riding Battle Hopper.
Add a photo to this gallery

Retrieved from "https://kamenrider.fandom.com/wiki/Battle_Hopper?oldid=618343"
Community content is available under CC-BY-SA unless otherwise noted.