The Grasshopper, the Father and Son, and the Ally of Justice
Chocolate, Faith, and the Power of Justice
Neverending Story

The Batta Yummy (バッタヤミー, Batta Yamī) is a grasshopper Yummy created by Uva by using the desires of Susumu Kanbayashi (神林 進, Kanbayashi Susumu, portrayed by Mitsunori Isaki), a father with a sense of justice who attended law school and failed to pass the board exam as a prosecutor. As a result, the Batta Yummy develops a warped hero mentality and attacks anyone who Susumu considers evil, attacking Kamen Riders OOO and Birth when they interfere. Managing to evade Kamen Rider OOO Takajaba's Giga Scan due to Susumu's dependence, the Batta Yummy continues his attack on untouchable criminals as Susumu begins to see realize too late that his desire for justice is making him as much of a monster as those he wants to take down. After talking Susumu to not to rely on justice but instead on protecting those dear to him, Eiji becomes Kamen Rider OOO Tajadol Combo and uses his Giga Scan to incinerate the Batta Yummy. It was able to move at superhuman speeds, jump high into the air, and emit electricity from its antennae.

The Batta Yummy was one of Amadum's monsters in the world within the Magic Stone. With the Arch Orphnoch and Alternatives 01, they attacked and defeated Beast when he intruded in Amadum's lair as he planned to harness the Kamen Riders power, forcing Beast to his proper place in space and time. The three monsters later appeared to capture the young Haruto and Koyomi, fighting off Haruto, Rinko, and Shunpei, when they tried to stop them. They brought the children to Amadum as Tsukasa Kadoya gave him the thirteenth and last Rider Ring (Fourze). The Kamen Riders refused to fight Haruto, saying they fought for human freedom and not just justice, engaging Amadum's monsters. The Batta Yummy, Arch Orphnoch and Alternatives 01, along with several other monsters, were destroyed by Wizard and Decade. Neverending Story

Batta Yummy concept art
Add a photo to this gallery 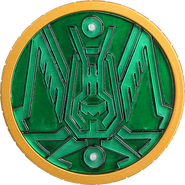 Woz vs. Another Agito

Production image with Batta Yummy headpiece.
Add a photo to this gallery

Retrieved from "https://kamenrider.fandom.com/wiki/Batta_Yummy?oldid=664303"
Community content is available under CC-BY-SA unless otherwise noted.