Jin Haganeya (As the story draft of the Movie)
Nobuhiro Mori

Baron's Soccer Showdown Summer Camp! (バロン・サッカー対決 夏の陣！, Baron Sakkā Taiketsu Natsu no Jin!) is the thirty-seventh episode of Kamen Rider Gaim. It is the third movie crossover/tie-in of the series following the ToQger vs. Gaim

special and the crossover with the REBOOT Kikaider. In this episode's case, its events tie into the show's summer movie, Kamen Rider Gaim: Great Soccer Battle! Golden Fruits Cup!. It introduces the alternate world seen in the movie, including the characters Lapis and Kamen Rider Mars, as well as featuring the return of Ryoji Hase.

Kaito meets DJ Sagara, who provokes him and summons a ghost-like Gaim Kiwami Arms. After the battle, he gets caught up in an alternate world where he leads Team Baron in the competition for soccer's All Rider Cup.

In the aftermath of the battle between Takatora and Mitsuzane, Kouta runs to the pier in order to locate the two. However, he is attacked by the Grasshopper Monster. Kouta realizes that this isn't an Over Lord, but a being just as strong. The creature gets away leaving Kouta appalled.

Kaito, on the other hand is affected by the attack caused by Redyue, lamenting that if he had just transformed before getting there, he wouldn't have received the injuries he had received. Appearing before him is DJ Sagara who informs him that Kouta is much stronger than him and is leaving him in the dust. Sagara opens a time distorted crack that brings forth a future Kouta who transforms into Kiwami Arms. Kaito trades blows with Kouta, but is interrupted by Lapis, who sends him to a different world. In this world, there is no Inves Invasion and in place of dance teams, there are soccer teams instead.

In this world, Ryoji Hase is alive. Kaito, untrained in the profession of soccer is trained by Kawasaki Frontale's Kengo Nakamura in order to sharpen his skills against Team Charmant. Kaito runs into Lapis and asks him if he's the one who brought him to this world. Lapis tells Kaito that his battle against the future Gaim Kiwami Arms still haunts him. The Grasshopper Monster appears before Lapis and attacks Kaito. Kaito manages to push back the monster as it retreats. Elsewhere, Kouta fights the same Grasshopper Monster and transforms into Kachidoki Arms. During this battle, DJ Sagara informs Kouta that time and space is being distorted and Kouta catches a glimpse of his personal future through a crack with him and Lapis. Kouta then transforms into Kiwami Arms and uses the Ichigo Charge: Kunai Burst attack, but the monster retreats back into Lapis' world. Kaito manages to defeat Team Charmant and fights the Monster who has just escaped Kouta. Kaito transforms into Banana Arms and later Lemon Energy Arms, defeating it with a Lemon Energy Sparking: Cavalier End.

Kaito walks to Lapis, who sends him back to his world. Kaito then gets a glimpse of his alternate self's future alongside the alternate riders with Kouta (mainstream). Kouta attempts to find Mitsuzane and Takatora again, but before him is Kamen Rider Mars who leaves the area, entering a crack that enters to Lapis' world. 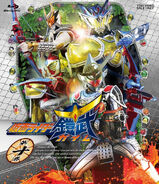 Retrieved from "https://kamenrider.fandom.com/wiki/Baron%27s_Soccer_Showdown_Summer_Camp!?oldid=581086"
Community content is available under CC-BY-SA unless otherwise noted.