After his defeat at the hands of Bravo, Kaito believes he is no longer strong enough and seeks out a new strength. While Kouta seeks out a new job, Mai finds herself trapped in the Helheim Forest again, forcing Kouta and Mitch to go and rescue her.

With Team Baron in fourth place while Team Gaim is in first, Kaito believes he must seek out new strength. While Kouta seeks out a new job and Mitsuzane wonders why the Suika Lockseed is no longer responsive, Mai finds an entrance to Helheim Forest. After failing to reach Kouta, she decides to venture through the portal to find Yuya. She is soon attacked by Inves, but Mai is saved by Armored Rider Baron. Kaito reveals that he is in the forest looking for new Lockseeds, and Mai decides to tell him about the portal she found, but they soon find it is gone. Kaito winces in pain, revealing his wound that Mai tries to dress up. Kaito reveals that his need for strength is the result of his family losing everything when the Yggdrasill Corporation redeveloped Zawame. Mai tells Kaito that she understands, as her family suffered as well, but explains that her definition of strength is that of giving happiness.

Though Kaito denounces her ideals of strength, he allows her to follow him to find a new way out. Meanwhile, upon learning of Mai's venture into the forest, Kouta goes after her on the Sakura Hurricane while Mitsuzane learns that Sid is at Team Gaim's garage. He ushers the others out of the garage when Sid reveals he is looking for information on the Suika Lockseed. Mitsuzane admits that he stole it from his brother, but he reminds Sid that he is also a Kureshima, and makes a request of the Lock Dealer. In the Helheim Forest, Gaim wakes up after he was knocked out after falling off a cliff upon his entrance into the forest. He wanders around, looking for Mai, until he is ambushed by several Inves. He is at a disadvantage until Ryugen arrives on his own personal Rose Attacker.

Once the Inves are defeated, Gaim reveals to Ryugen that the Helheim Forest is where the Lockseeds come from, prompting Ryugen to pick one off of a tree, transforming it into the Kiwi Lockseed. Elsewhere, Kaito and Mai find a portal back to Zawame, but they discover the Seiryu Inves nearby. Baron transforms to fight, but finds that the Bana Spear cannot harm the Inves. Gaim and Ryugen arrive to back him up, with Ryugen getting Mai through the portal to safety. Gaim and Baron battle the Berserker Inves and all three enter Zawame. When Gaim realizes Orange Arms is ineffective against the Inves, he switches to Pine Arms and successfully uses the Pine Iron to deal some damage to the Seiryu Inves.

This gives Baron the idea to use the Mango Lockseed he acquired previously, transforming him into Mango Arms, now armed with the Mango Punisher, which also seems effective. Together, the two Armored Riders defeat the Azure Dragon Inves, with Kaito now pleased with his strength. When he leaves, Mitsuzane realizes that if portals to the Helheim Forest are appearing on their own, as Mai had found earlier, then that means that Inves are now passing through into their world, while elsewhere in Zawame an Inves has already begun attacking people. 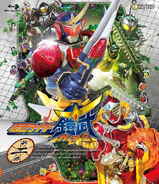 Retrieved from "https://kamenrider.fandom.com/wiki/Baron%27s_New_Power,_Mango!?oldid=581085"
Community content is available under CC-BY-SA unless otherwise noted.