View source
watch 01:32
She-Hulk Trailer Dropped - The Loop
Do you like this video?
Play Sound

Barcode Warrior Decade was developed as part of a series of Heisei Rider Gashats by Genm Corp.. As part of CEO Kuroto Dan's ambition to gather the power of the legends preceeding his own Kamen Riders, they contributed to the completion of his Kamen Rider Battle: Ganbarizing. [Part. I: Legend Rider Stage]

A manifestation of Kamen Rider Decade (仮面ライダーディケイド, Kamen Raidā Dikeido) appeared as part of a gathering of the first seventeen Heisei Riders which empowered Genm as he performed the Ganbarizing Critical Strike, defeating the three doctor Riders with one Rider Kick. Returning to his lair, Dan announced to Parado, who had taken the guise of Dr. Pac-Man, that everything was proceeding according to plan as his assembly of Gashats was completed. [Part. III: Final Legend Stage] 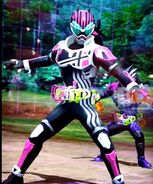