Bang Bang Shooting (バンバンシューティング, Ban Ban Shūtingu) is an action first person shooter video game being developed by Genm Corp., mentioned to be in development hell. It also served as the basis for the Bang Bang Shooting Rider Gashat.

Bang Bang Shooting is a multiplayer first-person shooter. The player need to shoot down target soldiers as fast as possible before they reach the player. The boss is the commander, Revol.

The game is a motion sensor game, with players using remote controls in the shape of the Gashacon Magnum like real guns.

It was envisioned by Kuroto Dan in the year 2000. Engineered History! During the development of the game, Genm Corp. found severe bugs within the prototype Gashats. Those glitches combined with the bugs of the other 9 games, evolved into the Bugster virus. A prototype of the game was utilized to combat the Bugsters by Taiga Hanaya. But, after his lost against Graphite, Taiga left his Gamer Driver and his Gashat. BANG, That Jerk is Coming! A Hollow Beating in the Heart!

The actual game was put on hold until the bugs could be purged and the game could be fixed, something Genm Corp. are still having problems with. But, the Rider Gashat version was ready for use. Five years later, Taiga paid Genm Corp's CEO Kuroto Dan with a large pile of cash to obtain the completed Gashat and a Gamer Driver for his personal use. Another Prodigy with No Thank You?

The game eventually had all of its bugs worked out and was released. Kamen Rider Para-DX with Poppy 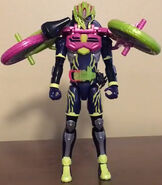 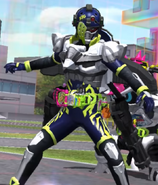 Revol Bugster is a malicious Bugster who takes his likeness from Commander Revol, having been created from the data of Bang Bang Shooting.

Revol Bugster Level 5
Add a photo to this gallery

When activated, the Gashat reformats the battlefield into a Game Area, and spawns multiple barrel drums around the area. These barrels can be destroyed to obtain Energy Items.

This Gashat was used by Taiga Hanaya during Zero Day to become Kamen Rider Proto Snipe, fighting Graphite in Level 1. Like all Proto Gashats, it is harmful to its user. Taiga discarded this Gashat after his loss to Graphite and subsequent firing, and it returned to Kuroto Dan's possession. Like all Proto Gashats (save for Proto Mighty Action X), this Gashat's color is black and the printed image is colored black and white.

This Gashatrophy (ガシャットロフィー , Gashattorofī) is the reward for defeating Revol in Kamen Rider Chronicle. It was claimed by Ride-Player Nico Saiba. Love & Peace for the Winner!

Retrieved from "https://kamenrider.fandom.com/wiki/Bang_Bang_Shooting?oldid=655281"
Community content is available under CC-BY-SA unless otherwise noted.