Bakusou Bike (爆走バイク, Bakusō Baiku, lit. "Roaring Bike") is a racing video game being developed by Genm Corp., mentioned to be in development hell. It also served as the basis for the Bakusou Bike Rider Gashat. As the personal Gashat of Kiriya Kujo/Kamen Rider Lazer (Turbo), it is by this name that Masamune Dan knows him.

Bakusou Bike is a racing game with no rules of any kind. Anything can be done to win in this game. The boss is the rival racer, Motors.

It was envisioned by Kuroto Dan by 2000. [Engineered History!] Bakusou Bike was one of the ten games created by Genm Corp. that is attributed to the rise of the Bugster virus. Sometime around 2013, coroner Kiriya Kujo was given the Bakusou Bike Gashat and the ability to become Kamen Rider Lazer in exchange for his silence about Zero Day. However, due to the unique nature of the Gashat giving him the Level 2 form of a motorcycle, Kiriya needed a partner to reach his full potential. [An Operation Called Dash!]

The Gashat was given to Emu Hojo by Kiriya upon his death [Christmas Special: Targeting the Silver X mas!], and he later began using it to summon the Bike Gamer on its own. [We're Kamen Riders!]

A second Bakusou Bike was in possession of the revived Kiriya Kujo, which transformed him to Lazer Turbo.[Accomplished Rebirth!] 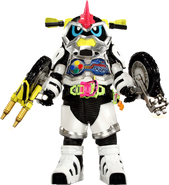 Motors Bugster is a malicious Bugster who takes his likeness from the racer Motors, having been created from the data of Bakusou Bike.

When activated, the Gashat reformats the battlefield into a Game Area, and spawns multiple trophies around the area. These trophies can be destroyed to obtain Energy Items. It is primarily used to transform into Kamen Rider Lazer Levels 1 and 2.

The Bakusou Bike Gashat can also be used in any Rider's Kimewaza Slot Holder to summon the Bike Gamer directly to act as an ordinary motorcycle.

A second copy of the Gashat was given to the revived Kiriya by Masamune Dan, allowing him to become Kamen Rider Lazer Turbo Level 0. It was developed with the functions of Proto Mighty Action X Origin Gashat implanted.[1]

Due to the Bugster infection within Emu Hojo, he was able to temporarily modify the Proto Bakusou Bike Gashat into a variant known as the Combi Fukkatsu (コンビ復活, Combi Fukkatsu lit. Revival) version, allowing him to use the Gashat to transform into Kamen Rider Ex-Aid Bike Action Gamer Level 0.

The Gashat would later revert back to its original form after the game Bakusou Treasure was cleared.

This Gashatrophy (ガシャットロフィー , Gashattorofī) is the reward for defeating Motors in Kamen Rider Chronicle. It was claimed by Hiiro Kagami. [The Forbidden Continue!?]