Hostage Trouble, What To Do Brother!?

Not Enough Love! A Dangerous Devil is Born!

Ayaka Oketani (桶谷 彩夏, Oketani Ayaka) is the eldest daughter of the Oketani family, and a childhood friend of Igarashi siblings. She was the contract holder of Kong Deadman.

Ayaka Oketani is the first daughter of Taeko Oketani and the elder sister of Miharu Oketani. She was also the childhood friend of Ikki and Sakura Igarashi. Due to Miharu's occupation as a popular idol, Ayaka started to feel lonely over her mother's attention on her younger sister. This led Julio to recruit her to the Deadmans where Aguilera granted her the Kong Vistamp.

One day while shopping with Sakura, a man who seems to be contracted Kong Deadman manages to abduct Ayaka and holds her hostage. Sakura would voluntarily accompany her and the both of them were held in an abandoned warehouse. The man threatens Ayaka to call her mother for a ransom, but she is busy attending Miharu's work and refused to call. Eventually, Ikki would defeat the Kong Deadman as Revi using the Mammoth Vistamp. Ayaka returned to the Deadmans' hideout where Aguilera convinced her to continue using the Kong Vistamp. 「Hostage Trouble, What To Do Brother!?」

The next day during Miharu's concert, Ayaka begged her mother to pay attention to her. This caused her to pull out the Kong Vistamp, revealing herself to be the Kong Deadman's contract holder. While Revi and Vice tries to subdue the Kong Deadman, Ayaka realizes that her mother will never listen to her as long as she is concerned to Miharu. Aguilera manipulates her into making an advanced contract with the Kong Deadman, as they fuse into the Kong Deadman Phase 2, taking her sister hostage. After that, Ayaka held Miharu on the roof of a skyscraper in order to lure their mother. Although she threatened the Fenix troops that she'll drop her, Ikki brought Taeko in order to convince Ayaka that she really does love her. While they were about to reconcile, the Deadman grew out of control and Ayaka was fortunately separated by the efforts of Revice using the Ptera Vistamp. She was later hospitalized under Fenix's care, with Taeko by her daughter's bedside. 「Not Enough Love! A Dangerous Devil is Born!」

The Kong Deadman can evolve into the Kong Deadman Phase 2 (コング・デッドマン フェーズ2, Kongu Deddoman Fēzu 2) once its host forms a higher contract and fuses with it. It has gained immense power in exchange for the host not being able to return to human form. Punching power that easily exceeds the normal Kong Deadman makes it possible to destroy buildings with only shock waves or fly freely around the city by punching the surface it is on. It is also able to hunt down the target with quick movements similar to teleportation. 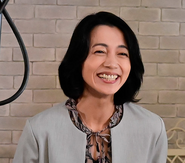