TBA (Fourze)
TBA (Movies)
TBA (Specials)
Full list of appearances
The Astroswitch Case (アストロスイッチカバン, Asutorosuitchi Kaban) is a special briefcase that resembles a Japanese schoolbag made to hold the Astroswitches and used by Kengo Utahoshi.

The case can hold up to eighteen Astroswitches, but despite its name, it is no mere case. The Astroswitch Case can act as a portable terminal with various functions, such as collecting data from the Foodroids (mainly Burgermeal), performing Zodiarts analysis, and communicating with the Rabbit Hatch. It also has an alarm system to alert a Zodiarts presence.

The case also has a vehicle operating panel for both the Powerdizer and the Machine Massigler.

When Fourze used Cosmicstates for the first time, Kengo had to open the case to release the Switches to be absorbed into the Fourze Suit.

This item was seen again in Sengoku Movie Battle as the Fourze Army's warlord guides his Bujin to attack Bujin Kiva and the Kiva Army. 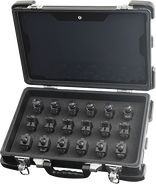 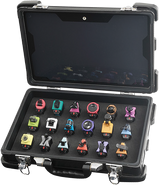