Argos was evidently born at some point by the mid-19th century at the latest. Reverse! Mysterious Science! The first born son of what would become the Gamma royal family, he was joined by a sister, Alia, and two brothers, Adel and Alain. Horrible! Disappearing World! Living in the Gamma World, Argos would spar with his youngest brother, Alain, teaching him to fight. Courage! Tragic Resolution! As recounted by Alia, their mother died following the family's arrival in the Gamma World. Conciliation! All Resolutions! Gather! Chain of Grief! Argos followed soon after, having succumbed to an illness after receiving a wound when protecting his family from being killed. This drove his father, the Emperor Adonis, to despair, leading him to strive to create a perfect world where death would not exist. Amazing! The Gamma's World!

Unknowingly to Adonis, Edith made an Eyecon based on Argos's soul right after latter's death. Later resurrected, Argos was granted a Ghost Driver by Sennin, allowing him to transform into Dark Ghost. Sennin sent him on an as yet unknown mission involving the granting of Sennin's wish, while entrusting Daigo Fukami to guide him. Strongest! Another Ghost!

Vowing to claim every Ghost Eyecon, Argos, as Dark Ghost, took to hunting historical figures who had emerged in the flesh within a distinct Eyecon-shaped world in which Argos resided under as yet unknown circumstances, starting by collecting the Eyecons of Ikkyu, Pythagoras, Kamehameha, Shakespeare, Galileo, Columbus and Nightingale. Defeating Napoleon, the disturbance created by Argos' was sensed by Sennin who, noting that his plan had gone terribly wrong, feared that Argos was gathering the Eyecons to create one particular Ghost Eyecon which could spell disaster. Amazing! World's Beginning!

Argos then sent his three Dark Necrom minions to collect the heroic Eyecons, both in his world and the "other world", proclaiming that Takeru Tenkuji would make his dream a reality. Upheaval! 100 Souls! As Dark Ghost, Argos saw off the Dark Necroms as they boarded their Iguana Ghostrikers before departing their world for Earth. Fate! Two Takeru!

Prior to his final confrontation with Adel, Takeru Tenkuji initially recognized the Kamen Rider Dark Ghost who welcomed him to the Gamma World as Argos, only to find that it was Edith having assumed the Rider system for himself. Gather! Chain of Grief!

Dark Ghost's forms are called Damashii (魂, Damashī, lit. "Souls"), accessed using the Ghost Eyecons. He also bears a headpiece called the Persona (ペルソナ, Perusona, Latin for "Mask"), which gives off a glow effect with the rest of his body. The Persona changes with Dark Ghost's numerous Damashii forms, as well as serving as a prefix title for all of the Damashii forms' helms.

By pulling and pushing the Ghost Driver's lever a second time after transforming, Dark Ghost can activate an Omega Drive (オメガドライブ, Omega Doraibu) finishing attack tied to the Ghost Eyecon currently being used. If he pulls and pushes the lever four times, he can instead execute an Oomedama (オオメダマ, Ōmedama, lit. "Giant eyeball" (大目玉, "Giant eyeball")) special attack.

Transient (トランジェント, Toranjento) is the default pre-form armor of Kamen Rider Dark Ghost. Like most pre-forms in the Kamen Rider Series, it is weaker than all of the other forms and exists solely as a transition stage of the armor to any given Damashii form.

Dark Damashii (ダーク魂, Dāku Damashii) is the default form of Kamen Rider Dark Ghost. Accessed through the use of the Dark Ghost Eyecon, this form is analogous to Kamen Rider Ghost's Ore & Toucon Boost Damashiis.

This form's finisher is the Omega Drive (Dark) (オメガドライブ ダーク, Omega Doraibu (Dāku)): A flying kick that uses spiritual energy which makes the body and mask of Dark Ghost's form glow and envelops him in a black flame.

This form's finisher is the Omega Drive (Napoleon) (オメガドライブ ナポレオン, Omega Doraibu (Naporeon)): A flying kick that uses spiritual energy which makes the body and mask of Dark Ghost's form glow and envelops him in a red and blue flame. It can also be used as a slash attack with the Gan Gun Saber/Sunglasslasher.

These Damashii involve Ghost Eyecons that are normally used by a different Kamen Rider.

This form is exclusive to Kamen Rider Ghost: The 100 Eyecons and Ghost's Fateful Moment.
Pythagoras Damashii

Pythagoras Damashii (ピタゴラス魂, Pitagoras Damashī, lit. "Pythagoras Soul") is Dark Ghost's white and gold form. It is based off of Pythagoras, an Ancient Greek philosopher whose renowned intellect brought forth new ideas in mathematics such as geometry and the creation of the Pythagorean theorem. Accessed through the Pythagoras Ghost Eyecon, this form bears a currently unknown helmet with a currently unknown faceplate.

These forms are exclusively available to be simulated with Dark Ghost in the Ghost Change toyline.

Robin Damashii (ロビン魂, Robin Damashī, lit. "Robin Soul") is Dark Ghost's green archer-based form themed after Robin Hood, a legendary outlaw whom historians have debated the existence of but has been popularized in fictional literature and pop culture.

Billy the Kid Damashii (ビリー・ザ・キッド魂, Birī Za Kiddo Damashī, lit. "Billy the Kid Soul") is Dark Ghost's brown cowboy-based form themed after Henry McCarty aka Billy the Kid, a legendary Wild West American outlaw and gunman who rustled horses and killed many men but is romanticized in pop culture as a rebel and folk hero.

Benkei Damashii (ベンケイ魂, Benkei Damashī, lit. "Benkei Soul") is Dark Ghost's white warrior monk-based form themed after Benkei, a giant of a sōhei who became infamous for positioning himself at a bridge and collected the swords of passing swordsmen, collecting 999 blades before being finally defeated by Minamoto no Yoshitsune, and loyally followed him through the Gunpei War and their time as outlaws following Yoshitsune's brother Yoritomo's treachery. Benkei died during the Battle of Komoro River, though in doing so cemented his place in history by killing an estimated 300 men of the 500 sent to kill them and died standing.

Goemon Damashii (ゴエモン魂, Goemon Damashī, lit. "Goemon Soul") is Dark Ghost's light green ninja/kabuki-based form themed after Ishikawa Goemon, a Japanese ninja thief whom, like Robin Hood in England, stole from the wealthy and gave to the poor, though he was executed by being boiled alive. Though accurate historical accounts of his life are scarce, many folk legends are told based on his supposed exploits and are reenacted in classic kabuki theater plays, thus making him a prominent figure in modern Japanese pop culture.

Ryoma Damashii (リョウマ魂, Ryōma Damashī, lit. "Ryoma Soul") is Dark Ghost's purple samurai-based form themed after Sakamoto Ryōma, a samurai who was an influential part of the events that brought about the end of the Tokugawa Shogunate. This led to the Meiji Restoration which changed Japan's government to that of a peaceful constitutional monarchy instead of one ruled by an Imperial shogunate family through war and conquest, though Ryoma's assassination prevented him from seeing his work.

Himiko Damashii (ヒミコ魂, Himiko Damashī, lit. "Himiko Soul") is Dark Ghost's pink shaman-based form themed after Himiko, the shaman queen of ancient Japan's Yamatai, back when the country was known by its earliest known name, Wa, which was during the Yayoi Period, following the Civil War of Wa.

Tutankhamun Damashii (ツタンカーメン魂, Tsutankāmen Damashī, lit. "Tutankhamun Soul") is Dark Ghost's turquoise and gold pharaoh-based form themed after Tutankhamun aka King Tut, one of the rulers of Ancient Egypt during its 18th dynasty and the most famous due to his many treasures on display in museums around the world as well as the infamous "Curse of the Pharaohs" associated with him.

Nobunaga Damashii (ノブナガ魂, Nobunaga Damashī, lit. "Nobunaga Soul") is Dark Ghost's violet and gold daimyo-based form themed after Oda Nobunaga, the 16th century Japanese warlord who ruled over a majority of Japan through brutal conquest and mastery of the rifle which led to the unification of the country after his death and the end of the chaotic Sengoku period.

Houdini Damashii (フーディニ魂, Hūdini Damashī, lit. "Houdini Soul") is Dark Ghost's indigo flying-based form themed after Harry Houdini, the early 20th century master magician and escape artist. What is somewhat lesser known about Houdini is that the man was also a debunker of the supernatural.

Sanzo Damashii (サンゾウ魂, Sanzō Damashii, lit. "Sanzo Soul") is Dark Ghost's Buddhist monk based form. It is modeled after Xuanzang, a Chinese Buddhist monk who lived during the Tang Dynasty in the 6th Century. He was famous for a 17 year holy pilgrimage to India and back, with said accounts of the pilgrimage later serving as the inspiration in the Ming Dynasty for the Chinese tale Journey to the West centuries after his death.

Darwin Damashii (ダーウィン魂, Dāuin Damashī) is Dark Ghost's orange geologist-based form themed after Charles Darwin, best known for his contributions to evolutionary theory. He established that all species of life have descended over time from common ancestors, and in a joint publication with Alfred Russel Wallace introduced his scientific theory that this branching pattern of evolution resulted from a process that he called natural selection, in which the struggle for existence has a similar effect to the artificial selection involved in selective breeding.

Dark Ghost Darwin Damashii was originally going to be in Kamen Rider Ghost: The 100 Eyecons and Ghost's Fateful Moment but was scrapped.

Transient (トランジェント, Toranjento) is the default pre-form armor of Kamen Rider Extremer. Like most pre-forms in the Kamen Rider Series, it is weaker than all of the other forms and exists solely as a transition stage of the armor to any given Damashii form.

Kamen Rider Extremer (仮面ライダーエクストリーマー, Kamen Raidā Ekusutorīmā) is a Rider form accessed through the use of the Extremer Driver. This form appears to combine the power of 100 heroic Ghost Eyecons and is more powerful than Kamen Rider Ghost Mugen Damashii.

Argos' name is from the 100-eyed giant Argus Panoptes in Greek mythology as well as his Kamen Rider Extremer form also had 100 "eyes". 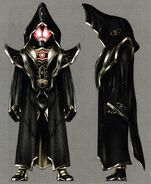 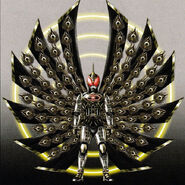