Villain (possessed by the Build AnotherWatch)

For the Kamen Rider Build episode or the character formerly known as "another Build", see Another Build (episode) and Shinobu Katsuragi.

"Me, Build. You, Cross-Z. Best Match!"
―Another Build voicing his excitement upon meeting Ryuga Banjo.[src]

This unnamed basketball player was turned into the Another Rider, Another Build (アナザービルド, Anazā Birudo), derived from Kamen Rider Build RabbitTank Form.[1]

In 2017, a young basketball player was practicing when one of his balls rolled out into the street. He chased it down and was about to be hit by a car when Heure  intervened, freezing the car in time. Heure explained that he was fated to die at this moment in time, but said that if the young man made a contract with him, he would save his life. The basketballer agreed, and Heure declared that he would become Kamen Rider Build, placing the Another Build Ridewatch in his chest and causing him to transform into Another Build. Using his newfound power, Another Build captured a tennis player and a karateka in Empty Bottles, declaring them a "not Best Match" as he walked off. One year later, Another Build later confronted Sougo Tokiwa, who attempted to fight it but was quickly overpowered. Taking inspiration from Tsukuyomi and Woz, Sougo decided to become "the greatest, kindest demon king ever" and transformed into Kamen Rider Zi-O, battling Another Build briefly before defeating him with a Giri Giri Slash attack that reverted him to his original human form. Kingdom 2068

Unknown to everyone, Heure appears out of nowhere and reactivates the Another Build Ridewatch, converting the basketball player into Another Build once more. The monster Rider continues his attack in 2018, capturing a baseball player, but Kamen Rider Geiz stands in his way. However, Geiz is unable to beat him and just about when he was about to land an attack Zi-O deflects the attack and knocks a baseball back at Another Build. As the battle continues, no matter how many times he was destroyed by Time Break/Burst he came back. Eventually, Sougo leaves the battlefield and returns with news that they needed to return to the year 2017, giving Geiz the Cross-Z Ridewatch. Another Build tried to snatch them, but he was too late. In the year 2017 he captured an archer and a swimmer in Empty bottles, this time declaring them as "Best Match". Before he could continue, Sento and Ryuga appeared. The monster rider hugs Ryuga out of the blue, declaring both him and Cross-Z as "Best Match", leaving Sento oddly jealous. Sento and Ryuga transform into Build RabbitTank form and Cross-Z respectively, albeit Build's transformation starts glitching due to the Time Paradox of Another Build's existence. Zi-O and Geiz appeared and fend Another Build off. As the four riders battled the monster rider, Sento's and Ryuga's transformations are cancelled as their power completely vanishes. Zi-O then uses the Build Ridewatch to become Zi-O BuildArmor and manages to defeat the monster Rider with Geiz's help. As Another Build reverted back to his human form, the Another Build Ridewatch was destroyed. He woke up back in 2017 right when he was supposed to be ran over by a car, but now without a Watch, although the car still had been swept aside.Best Match 2017

A year later, the boy was attacked by Another OOO (Another Zi-O assuming its form) and critically injured with his Another Build powers taken from him. Another Zi-O 2019 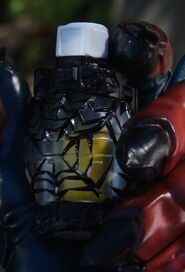 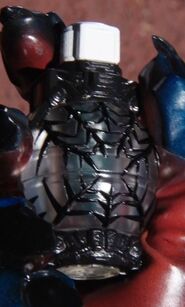 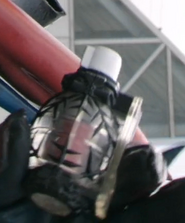 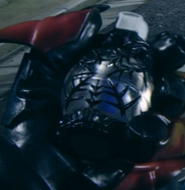 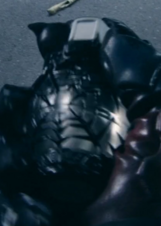 "Archery Bottle"
Add a photo to this gallery

The Human Another Build is portrayed by Taisei Mori (森 大成, Mori Taisei). As Another Build, his suit actor is Jun Watanabe (渡辺 淳, Watanabe Jun).

Retrieved from "https://kamenrider.fandom.com/wiki/Another_Build_(first)?oldid=549823"
Community content is available under CC-BY-SA unless otherwise noted.