The third-year class goes on a field trip to Kyoto where they believe they will be free from the Zodiarts for once, but are ambushed by the Libra and Leo Zodiarts. While there, Kengo meets one of his father's old friends. Meanwhile, a enamored girl is determined to snag Gentaro's heart, and poor Yuki is forced to help...

In Mr. Ohsugi's class, in preparation for a field trip to Kyoto, Gentaro and the others learn their group is to be joined by Yukina Takamura who wants to be more than Gentaro's friend. Once at Kyoto, Kengo takes his leave from Mr. Ohsugi as he finds the others ran out on him too for a look across the town. Despite her attempts on Gentaro as they look across Kyoto, Ryusei refuses to give Yukina an inch. When the Libra Zodiarts suddenly shows up, Yuki gets Yukina away while Gentaro and Ryusei assume their Kamen Rider forms to fight him.

After Kamen Riders Fourze and Meteor lose him while they attempt execute a double Limit Break, Gentaro is dragged by Yukina to the movie village as Ryusei notices a recently broken stone tablet. Elsewhere, Kengo meets Doctor Kuniteru Emoto, one of his father's old friends, to find out more about Cosmic Energy. He proceeds to tell Kengo of his father and then of the Hole, an event tied to Cosmic Energy and above Amanogawa High. Furthermore, revealing another manifested above Kyoto, Doctor Emoto explains how Kyoto made have been attempted to utilize Cosmic Energy with four cardinal points before being alerted to a disturbance in the Hole. Back in Kyoto's movie village, getting dressed in feudal attire with the others and blackmailing Yuki into helping her, Takamura gets Gentaro alone in an Asuka-style house before a group of Dustards arrive to attack them. 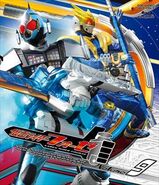 Retrieved from "https://kamenrider.fandom.com/wiki/Ancient_City_Mayhem?oldid=580946"
Community content is available under CC-BY-SA unless otherwise noted.