An Eel, the World, and the Gravity Combo

An Eel, the World, and the Gravity Combo (ウナギと世界と重力コンボ, Unagi to Sekai to Jūryoku Konbo) is the twelfth episode of Kamen Rider OOO. It is the debut of Sagohzo Combo.

Eiji teaches a lesson to Tsukuba and Gotou about going forth to gain what is desired; while Ankh tries to figure a way to manage the flying Ageha Yummy using Gamel.

Reeling after taking a hit from Shintaro Goto's bazooka, Kamen Rider OOO is overpowered by the Ageha Yummy until he resumes Tatoba Combo to regain the advantage before the Yummy flies off. Soon after, while trying to help Shintaro up, Eiji learns that the young man sees him as an unworthy hero. After Ankh explains that Shintaro can not become Kamen Rider OOO, Hina arrives after giving Uva the slip to tell Eiji what has happened to Tsukuba. Meanwhile, as Gamel gives Mezool back her Tako Medals and Uva offers to work with him to finish Kamen Rider OOO off, a suspended Shintaro is once more confronted by Kiyoto Maki who tricks him into proving his worth, again. At the Cous Coussier, as Ankh thinks about getting Gamel's Core Medals, Eiji and Hina are amazed to find Tsukuba entering the restaurant as he asks Eiji if he can use his story for his own. After learning that Tsukuba traveled only to prove himself to everyone, Ankh confirms him to be the Ageha Yummy's host. With Hina taking Tsukuba to follow him and see the consequences of his desire, Eiji stops the Ageha Yummy from attacking other celebrities before becoming Kamen Rider OOO to fight him as Shintaro arrives. Both Tsukuba and Shintaro are shocked when Eiji gives the former his consent as long others are aware of what has really happened. Hearing those worlds, Tsukuba admits that he never traveled round the world as Shintaro decides to back up his intent. With Shintaro giving him the Denkiunagi Candroids, Kamen Rider OOO manages to hold the Ageha Yummy at bay until Uva and Gamel arrive. Overpowered by the two Greeed and the Ageha Yummy, Kamen Rider OOO manages to get a set of Gamel's Core Medals at Ankh's demands. Using the newly acquired Sai, Gorilla, and Zou Core Medals, Kamen Rider OOO assumes his Sagohzo Combo. Driving the Greeed off as Ankh takes Uva's Kuwagata Medal, Kamen Rider OOO smashes the Ageha Yummy into oblivion with Sagohzo Combo's gravitational powers and brute force. As Ankh admits that he is impressed with Eiji's tolerance to the Medal Combos, Eiji finally gains Shintaro Goto's friendship. Later, after learning, that Tsukuba has decided to leave and achieve short-term goals, Eiji gives him a pair of boxers as a farewell present. 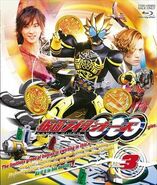 Retrieved from "https://kamenrider.fandom.com/wiki/An_Eel,_the_World,_and_the_Gravity_Combo?oldid=645425"
Community content is available under CC-BY-SA unless otherwise noted.