A New Year's card from Marshal Armor arrives for Yuki Joji, so he and Kazami Shiro investigate the return address. When they split up and enter the manor, Coelacanth-Kid attacks V3 and Riderman falls into Marshal Armor's hands. The mutant takes on Joji's form, becoming "Destron Riderman" in order to wipe out Shiro and the Rider Scouts. Shiro is tricked by the fake Joji and is thrown off of a cliff! Then the evil imposter makes his way to Rider Scouts HQ. 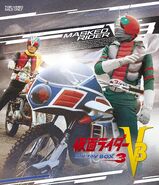 Retrieved from "https://kamenrider.fandom.com/wiki/Ambush!_The_Destron_Leader!!?oldid=590558"
Community content is available under CC-BY-SA unless otherwise noted.