Amazing! The Castle in the Sky! (驚愕！空の城！, Kyōgaku! Sora no Shiro!) is the fourth episode of Kamen Rider Ghost. It features the return of Ghost Newton Damashii since from Kamen Rider Drive: Surprise Future. It also features debut of the Gan Gun Saber's Naginata Mode and Kamen Rider Specter.

Takeru, who has obtained his third Eyecon, is told by Sennin that the fourth one, Oda Nobunaga, is not going to be easy to obtain. A new client, Kuroda, has come to the Mysterious Phenomenon Institute requesting their assistance as their president of the Sengoku Corporation has suddenly become cold and tyrannical and things have been seen floating around at the company’s headquarters. Could this be the work of a Gamma? Takeru starts investigating. Clues include the letter from a famous Japanese general and the suspicious behaviour of Sakuma, one of Kuroda’s secretary.

Alain and Mysterious Man are seen observing the defeat of Ono Gamma by Ghost. Tired of his failures, Alain begins to take matters into his own hands.

In Daitenku Temple’s research lab, Onari told Takeru and Akari that Shibuya and Narita found a rumor circulating around that an individual is promising to make any wish come true. Akari and Onari argues with each other on whether to investigate the rumor or not but is interrupted by the appearance of Sennin who gives Takeru a hint that that the fourth one, Oda Nobunaga, is appearing but not going to be easy to obtain. Onari was informed via a phone call that there is a new case for Mysterious Phenomenon Institute. The new client is revealed to be Hideo Kuroda from Sengoku Corporation who told them that their president has suddenly become cold and tyrannical and things have been seen floating around at the company’s headquarters and their affiliates’ offices. Takeru assigned Akari and Onari to investigate the strange incident while he will meet up with the president.

In Sengoku Corporation, after witnessing an argument between Mr. Hashiba and Mr. Mori, things started to float around the office. Takeru spotted Book Gamma dragging Mr. Mori away. He found them at the rooftop but Book Gamma pushes Mr. Mori down from the roof. Takeru started to transform into Ghost to save him but Book Gamma appeared and started to fight Ghost for ruining his fun. During the battle, Yurusen appeared to guide Ghost to activate Gan Gun Saber's Naginata Mode to counter Book Gamma’s duplication ability. After launching Omega Stream at one of Book Gamma’s duplication and apparently defeated the Gamma, Ghost realized that the Gamma with the dodo on his head is the real one. A mysterious rider is seen spying on Takeru holding Cobra Keitai in Cobra Mode reverted back to Keitai Mode which revealed to be the man who is in leather jacket from before. When Takeru returned back to see Mr. Mori, he saw a lady having a conversation with the latter. He followed her to find out who is she after finding the conversation is done.

In Azai Construction, a company affiliated with Sengoku Corporation, Akari and Onari is seen interviewing an employee regarding the floating objects incident. After the interview, Akari spotted a map indicated with red dots on the wall. Takeru followed the lady he saw before entering president’s office. He went in and spotted Oda Nobunaga's letter in the president’s office before getting caught by the appearance of the Hashiba. Takeru introduced himself to Hashiba and found out that his father visited him before. Hashiba shared his admiration for Oda Nobunaga to Takeru before interrupted by the appearance of the lady earlier. Kuroda revealed to Takeru that the lady he seen earlier is Hashiba’s secretary, Risa Sakuma. Takeru went invisible to spy the conversation between Nobuyoshi Hashiba and his secretary after knowing the identity of that lady.

Akari asked Onari if he felt something strange about the map on the wall and proceed to draw and connect all the dots together using a marker to form an eye drawing. When things starting to float around, Akari started to spray Shiranui around the office and revealed the presence of Book Gamma. Book Gamma is seen at all over Sengoku Corporation affiliates’ offices making things float, causing a part of the city to float as a result. Risa brings Hashiba to the rooftop and announced that the floating city named Azuchi Castle is his city, and with that city he will reign over Japan. Takeru reaches the rooftop with Kuroda and asked what Hashiba is doing. However, having Risa provoking Hashiba, this action is about to unleash the Oda Nobunaga Ghost. Takeru calms down Hashiba with a hug, cancelling the Gamma's influence. Risa is angry at Takeru for ruining everything and Book Gamma appears to assist her by attacking Takeru.

Takeru transformed into Ghost Robin Damashii to fight Book Gamma. Ghost finally defeated Book Gamma, but it causes the floating city to drop as copies of Book Gamma causing the floating cease to exist. Yurusen appears to inform Ghost that Oda Nobunaga Ghost is about to appear but he decided to save the city instead. Ghost asked Yurusen for help in stopping the city from falling and is given Newton Damashii. He recalled that he obtain the Eyecon during Neo-Shade incident with Shinnosuke. He activated Newton Repulsion ability to stop the city from falling but is overwhelmed by the weight. He again asked Yurusen for help as he is getting crushed but Yurusen reminded him of his ghost abilities. Ghost appeared back in the city in one piece and Yurusen hurried him to get Oda Nobunaga Ghost.

Back on the rooftop, Kuroda is seen knocked out with Risa strangling Hashiba. Ghost arrived and saved Hashiba by pushing away Risa and proceeds to unseal Oda Nobunaga's letter. After Oda Nobunaga Ghost is released, a Gamma Assault de-possessed from Risa was swiftly destroyed by Ghost before it could have made a move on the Parka Ghost. Before Ghost can convert Oda Nobunaga Ghost into an Eyecon, a mysterious rider from before appears to stop him and convert Oda Nobunaga Ghost into an Eyecon, gaining Nobunaga Damashii as a result and leaves. Alain is seen witnessing what is happening on the rooftop and revealed that the mysterious rider is Kamen Rider Specter. After Book Gamma incident, Hashiba together with Kuroda and Risa is seen thanking Takeru, Akari and Onari for their help. Akari is amazed that Gamma can possess people with Onari added that Risa cannot recall her actions under possession but curious why Gamma targeted her since she is just Hashiba’s secretary with Akari agreed that their plan would have been faster if targeted Hashiba directly. Alain is seen spying on Takeru and his friends leaving Sengoku Corporation but he seems unfazed by Ghost defeating the Gamma, saying that it was just a small sacrifice compared to what was gained.

Back in Daitenku Temple’s research lab, Takeru questioned Sennin who is that mysterious rider from before, but Sennin revealed that he may have forgotten to mention that Takeru is not the only Kamen Rider. Takeru demanded Sennin that if he have other Eyecons, why he didn’t give them to him but Sennin replied that he slipped his mind. Finally, Takeru learns from Sennin of why Gamma cannot possess the person who has ties to a Heroic Spirit. 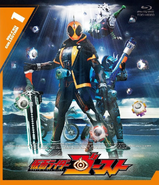 Retrieved from "https://kamenrider.fandom.com/wiki/Amazing!_The_Castle_in_the_Sky!?oldid=584841"
Community content is available under CC-BY-SA unless otherwise noted.