Alia (アリア, Alia) is the daughter and second child of the Grand Imperial Majesty Adonis and the older sister of Adel and Alain, as well as the younger sister of Argos. She was the one who watched over the Fukami siblings during their time in the Gamma World. She is able to transform into Kamen Rider Dark Necrom Pink (仮面ライダーダークネクロムＰ [ピンク], Kamen Raidā Dāku Nekuromu Pinku).

Alia was evidently born in the world of the Gamma at some point by the mid-19th century at the latest, Reverse! Mysterious Science! the secondborn child and only daughter of the Emperor Adonis and his wife. She was joined by two younger brothers, Adel and Alain; and an older brother, Argos; before their mother died. Amazing! The Gamma's World! Horrible! Disappearing World! Conciliation! All Resolutions! Gather! Chain of Grief!

Alia found two humans, Makoto and Kanon Fukami, soon after the two were sucked into the Gamma World. She was shown bringing them to an unknown location, running into her brother Alain along the way. When Alain coldly ignored the humans, she told them not to mind him and to keep going. Reverse! Mysterious Science! Alia subsequently assured the siblings that they didn't need to worry anymore and that they could live with her. Explode! Flames of Friendship!

She first appears in the present day alongside her younger brothers and her father, Adonis, as they are met by the Gamma magistrate, Edith, who had requested an audience with the royal family. Explode! Flames of Friendship! Later, Alain confided with her his confusion with his father's advice to follow his heart. Alia stated that Adonis must have his reasons, before asking Alain about Makoto and Kanon, wondering if they could meet again. She seemed distraught when Alain dismissed the idea, saying that Makoto and Kanon could never return. Amazing! The Gamma's World! Adel informs Alia that their father was assassinated by Alain.

However, Alia’s disbelief that Alain would never do something on their father. In the same time, Makoto visits Alia for her kindness on raising him and Kanon. As her debt, Makoto offers Alia to visit the human world, the Earth. Despite Makoto's offer, Alia cannot leave her homeworld due to being needed, while also informing Makoto that Alain is being framed by Adel for assassinating Adonis. Conspiracy! Adel's Trap!

She noticed that her father was never being killed due the former was in his Gamma Eyecon body. Appearance! The Mysterious Warrior! Alia soon found her father being kept hidden, but Adel warned her to stay back, as he is now in his original human body and being held a prisoner in a barrier that could have her being hurt by Adel, learning that Adel is indeed lying to her and their people all along for his regime.

Without any option, she must follows Adel's play until the time has come to get reinforcements like from Alain. But much worst, she is warned by her father of the Gammaizers’ current status of becoming self-aware in their first stages, as they can now easily manipulate someone whose wishes are too dangerous and too weak to control the Gammaizers, which explains Adel's sudden corruption ever since their mother and elder brother Argos died. With Adel becoming the Gammaizers' main subject to manipulate him as a puppet king for their attempt to use their wishes to become full sentient beings and destroy every lives into nothingness.Conflict! The Terms of Resolution!Conciliation! All Resolutions!

Once Alain finally arrived on time with a reinforcement, Alia reveals to her younger brother that it was a set-up by their brother, Adel on making their homeworld into an imperfect world/dystopia, not a perfect world/utopia they tried to achieved. Do-or-Die! Ready for Infiltration!

After she learns from Takeru that her father was killed at the hands of his own son, Adel, leaving Alain to become broken, Alia defends both Takeru and a broken Alain from Adel's army, asking Takeru to take care of Alain for her before he left, as Takeru already kept his promise to Makoto to begin with, and thanks her for her similar advice and promises. Bursting! Power of the Depths!

Forever! Cries of the Heart!

Reminiscence! Secret of the Mind!

Wondering what was happening to Adel, Alia confronted Edith, asking what he was trying to do. Edith replied simply that he wanted to create a utopia. Resurrection! Hero's Soul!

She later confronts Adel, Gammaizer Climate and Gammaizer Planet as Kamen Rider Dark Necrom Pink. But her power is no match for that of the Gammaizers and she is forced to cancel her transformation which causes her Gamma body to be destroyed leaving the shattered remains of her Eyecon to be absorbed by Gammaizer Magnetic Blade. Opposition! Father & Daughter! After she awakens from her stasis tube, she is held captive by Adel. Courage! Tragic Resolution!

Alia witnessed Emperor Adel begin his transformation into the core of the Demia Project, advising her younger brother that he could still turn away from this only to be silenced by Adel who rendered her unconscious with his power. Activate! Terror of Demia!

Duel! Words from the Swordsman!

When Takeru, Alain and their friends return to Ganma World for their final confrontation against Adel and the Gammaizers, while saving the rest of the victims of Demia, Alia is saved and helps Takeru to show Adel a further truth that Adonis kept secret from his children, along with the Gammaizers' true motive when they become sentient in their early stage. This finally redeems Adel however, it is too late for the heroes to stop the Ganmaizers' secret plan of becoming full sentient beings. The Gammaizers possess Adel, which causes Takeru his no choice to kill him due to his unbreakable link with Demia and the Great Eye under his own last request to atone for his sins. Eventually, Adel is freed from his connection to Demia and Great Eye, and the Gammaizers’ control, now as a spirit. Alia and Alain keeps Adel's promises to make sure no one other than themselves repeats Adel's sins, as Adel's spirit departs to the afterlife. Unfortunately, Alia and her allies are too late to find out the Ganmaizers' other secret plan through copying their consciousnesses into a copied Deep Specter Eyecon of Makoto's clone even if their original template is destroyed, and manage to take over the Great Eye's body and fused into an abominable creature known as Great Eyezer.Gather! Chain of Grief!

After the final battle against the Great Eyezer, Alia oversees the surviving people of the Gamma World returning to their mortal human bodies.Infinity! Power of Humanity! 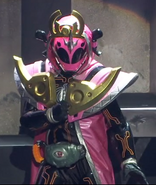 Unlike her brothers, Alia does not have an inherent hatred of humanity. She showed genuine kindness to Makoto and Kanon, and remember them as fondly as they do her. Alain seems to have a better relationship with her than with Adel, as he went to her for advice on something their father said. This is further evident as she begged Adel to stop with his plans, much to it falling on his deaf ears.

Dark Necrom Pink's forms are called Damashii (魂, Damashī, lit. "Souls"), accessed using the Ghost Eyecons. She also bears a headpiece called the Persona (ペルソナ, Perusona, Latin for "Mask"), which gives off a glow effect with the rest of her body. The Persona changes with Dark Necrom Pink's numerous Damashii forms, as well as serving as a prefix title for all of the Damashii forms' helms.

Transient (トランジェント, Toranjento) is the default pre-form armor of Kamen Rider Dark Necrom Pink. Like most pre-forms in the Kamen Rider Series, it is weaker than all of the other forms and exists solely as a transition stage of the armor to any given Damashii form.

Despite the lack of a Liquid Dropper, Dark Necrom Pink is capable of using finishing attacks. This form's finisher is the Dark Necrom Spiral (ダークネクロム スパイラル, Dāku Nekuromu Supairaru): A spinning kick that uses spiritual energy which makes the body and mask of Dark Necrom Pink's form glow and envelops her in a pink flame for a two-footed corkscrew kick.

This form is exclusive to Ghost Episode 39.

As with all Gamma, Alia's natural basic form is the Gamma Eyecon (ガンマアイコン, Ganma Aikon).

Her Eyecon body was destroyed by the combined might of two Gammaizers. Opposition! Father & Daughter!