A Smile in the Chest

A Smile in the Chest (笑顔は胸に, Egao wa Mune Ni) is the forty-fifth episode of Kamen Rider Wizard.

Haruto must split his attention on saving Kumagai from Siren while they try to find a toy for his son and revealing what he knows to Koyomi about her past. Meanwhile, a red crack appears on Koyomi's hand. What does this mean? Medusa and Mayu face each other again.

Back at the house of Tamotsu Sakai, the man in possession of the toy plane, Haruto explains to Nitoh the reason of his sudden leave and asks to let him deal with White Wizard, as he is also has questions to him. However, Sakai, who is an avid toy collector, refuses to return the plane to Kumagai no matter how much he is willing to pay for it. Haruto is then called by Wajima about Koyomi's condition and flees back to the Omokagedō, while Sakai's son Sho leaves the house to play by himself and is approached by Siren.

Reunited with Koyomi, Haruto decides to infuse all of his mana to heal her, but she refuses, claiming that he must save enough energy to protect Kumagai. Meanwhile, Sho steals the plane and escapes to deliver it to Siren by his request, with Kosuke, Sakai and Shunpei running after him, but Medusa appears to confront Kosuke, who has a hard time against her until Mayu appears to fight her in his place. Haruto returns to protect Kumagai from the Phantom, but when Black Cerberus appears before him, he considers the possibility of intentionally let Kumagai fall into despair for the sake of White Wizard's plans, but Nitoh appears to assist him, and after Siren flees, Shunpei reprimands both Haruto and Kosuke for straying from their mission to protect the Gates.

Haruto then apologizes to Kumagai, who learns that the boy was not being controlled by the Phantom, but acting by his own volition instead, as he was angry at his father for giving too much attention to his toy collection. Kumagai then decides to destroy the toy plane, claiming that his true hope comes from his memories of his late son and his desire to help others. Realizing his neglection, Sakai reconciles with his son. Mayu finds that Medusa is too much for her to handle by herself and fails to prevent her retreat. Haruto and Kosuke make use of all their PlaMonsters combined to track down Siren, and while Kamen Rider Beast Hyper deals with her Ghouls, Kamen Rider Wizard Infinity Style finishes her with the Axcalibur's Giga Shining Dragon.

Some time later, Gremlin realizes that Wiseman's real objective is not to create more Phantoms and believes that somehow it is related to Koyomi. As Misa approaches him with information about another Gate, Gremlin affirms that now he knows what he must really do to obtain the Philosopher's Stone. 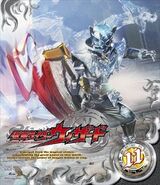 Retrieved from "https://kamenrider.fandom.com/wiki/A_Smile_in_the_Chest?oldid=568143"
Community content is available under CC-BY-SA unless otherwise noted.