It marked a farewell to Kohtaro Minami and the ten veteran Kamen Riders as the Kamen Rider Series once again departed as a TV series. Kamen Rider would surface in smaller forms during the 1990s such as Kamen Rider SD as well as three stand-alone films, Shin Kamen Rider: Prologue (1992), Kamen Rider ZO (1993) and Kamen Rider J (1994), (Black RX itself would be adapted in America in the middle of the decade) before Shotaro Ishinomori's death in 1998. Nevertheless, at the start of the new millenium 11 years later, a new Rider series, Kuuga, would premiere, bringing about what would become the most successful revival of Kamen Rider, starting a whole new era of the series continuing to this day. 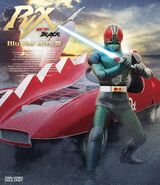 Retrieved from "https://kamenrider.fandom.com/wiki/A_Shining_Tomorrow!?oldid=618161"
Community content is available under CC-BY-SA unless otherwise noted.