AGITΩ (ＡＧＩＴΩ, Agito) is the fifty-first and final episode of Kamen Rider Agito.

With people killing themselves because of the OverLord and two Els killing people with the Seed of Agito the Kamen Riders must unite their strengths to save humanity from extinction.

Makoto Hikawa decides not to take the plane back to his hometown, saying to Ozawa that he could not leave at the time. The two then moves out of the airport and regains control of the G3-System in Hojo's hands. Makoto, donning the G3-X armour one final time, rides his motorcycle to combat the Lords threat.

Shoichi Tsugami as Agito Ground Form struggles to defeat the El Of The Ground. He decides to switch to Burning Form. However, the El Lord still proves too much to handle. Shouichi is tackled into a place of intense sunlight. Burning Form evolves into Shining Form. Shouichi then proceeds to defeat the El Of The Ground with ease using the dual Shining Calibers. Nevertheless, the El returns to the OverLord for another chance, with Agito in hot pursuit behind.

Upon reaching the OverLord's resting place, Agito has to face both the El Of The Ground and El Of The Wind. Despite being in his strongest form, Shouichi is forced out of his transformation in the two-on-one battle, with his Shining Calibers broken in the process. As the El Of The Ground prepares to kill Shouichi, Makoto comes to his aid and offers to fight side by side Agito for the last time. The OverLord mocks Makoto for being only a "mere normal human". G3-X manages to stall the two El Lords for a time, surprising even the El Of The Ground.

Just as Hikawa is knocked down, a revived Ryo Ashihara arrives and joins the battle. Claiming he is an immortal, Ryo transforms into Kamen Rider Gills Exceed Form to assist the 2 Riders. Shouichi once again transforms into Agito Shining Form, vowing to protect humanity from the OverLord's genocidal attemmpt. The two El Lords and the three Kamen Riders meet in one final decisive battle, with Ryo and Makoto fighting El Of The Wind, and Shouichi fighting El Of The Ground.

With the combined effort of Gills and G3-X, the El Of The Wind is destroyed, and the El Of The Ground is killed by Agito's Shining Rider Kick. The OverLord transforms into an orb and intends to fly away. Shouichi prepares another Shining Rider Kick aimed at the OverLord. When the kick hits, an enormous explosion occured , engulfing both of them in smoke, with Hikawa wondering what happened.

The OverLord is revealed to be alive, however, as he arrives at the original Shouichi's (Tetsuya Sawaki's) house and talks to him about the future of mankind and Agito. The OverLord assures Tetsuya that he no longer needs to help him terminate the Agitos, because humanity will do it for him instead. Tetsuya believes otherwise, that humanity will eventually learn to accept the Agitos as proofs of humanity's endless potential of evolution. The OverLord decides to stand on the sidelines and watch whether he or Tetsuya is correct, not attempting to harm humans or Agitos for the time being. Tetsuya responds with a happy smile, confident that he will be right. The OverLord disappears. Tetsuya, now has run out of borrowed time, falls down and dies.

One year later, Makoto and Ozawa have left the G3 unit, leaving Takahiro Omuro the leader of the now-G5 Unit. Makoto returns to his life as a normal police officer, while Ozawa goes on to be a lecturer in England. Ozawa meets Toru Hojo in her university, both of them still as bitter towards each other as before. However, Ozawa leaves the conversation with a smile on her face this time.

Ryo Ashihara finds a stray dog, and decides to take it with him to travel the world together.

Koji Majima now lives in the Misugi household along with Mana, harbouring a dream of being a doctor. The two are seen studying maths. The family heads out for a dinner outside.

The family comes to a restaurant named "AGITO", which is run by no other than Shoichi Tsugami. Everyone orders a "Shouchi Special. Shouichi agrees and smiles as the series end. 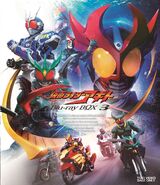 Retrieved from "https://kamenrider.fandom.com/wiki/AGITΩ?oldid=656995"
Community content is available under CC-BY-SA unless otherwise noted.