1000, the Kamen Riders, and the Birthday

As the movie continues to have complications, Sendou discovers the prices of making a deal with an enemy who takes advantage of his pride of who he is.

Though he is forced to destroy the Ōmu Yummy to save Kamen Rider Birth, OOO Shauta Combo loses the Ika-Jaguar Yummy before the Combo's strain comes into play as Eiji and Shintaro look after the wounded Date. Finding Kougami watching all the battles of the past Kamen Riders, Ankh demands answers of who has his Core Medals as the movie is on hiatus. However, though badly injured, Date wants to finish the movie for the children. During the filming, with Date wanting to make the fight scenes, Sendo arrives with some extras for the film to ensure just that before he leaves. By then, the extras, actually Yummy, attack Kamen Rider OOO as Sendo reveals himself as a former Shocker Combatman who proceeds to summons his grunt-like Yummy army to overpower the Kamen Rider before he assumes Tajadol Combo to destroy them all, much to Sendo's shock of finding Cell Medals in their place. By then, the Ika-Jaguar Yummy appears as Kazari reveals that he used Sendo's dream of reviving Shocker and punishing the Kamen Riders for years of beating the grunts up to his advantage. However, wanting to be in the climax that he is filming, Kamen Rider Birth fights Kazari before his injuries act up. However, thanks to Sendo and Shintaro's intervention in their respective fights, Kamen Riders OOO and Birth manage to turn the tables before Erika Satonaka arrives with a monitor. Though he reveals that he lied about knowing the identity of the holder of Ankh's Core Medals, Kougami orders Kamen Rider Birth to use all 1,000 Cell Medals to form the CLAWs Sasori to drive Kazari away before using the mecha to weaken the Ika-Jaguar Yummy to help Kamen Rider OOO Shauta Combo destroy the monster. Later, after watching the end of the film with Sendo and Kamen Rider OOO calling a temporary ceasefire, while stating it to be an excellent 1,000th episode, Kougami declares the birthday celebration of the 40th anniversary of the Kamen Rider Series has only begun . 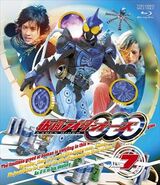 Retrieved from "https://kamenrider.fandom.com/wiki/1000,_the_Kamen_Riders,_and_the_Birthday?oldid=651046"
Community content is available under CC-BY-SA unless otherwise noted.