TBA (Drive)
Full list of appearances
The 10-ton Weight (10tオモーリ, Jū Ton Omōri) is a Tire Specific Item that is wielded by Kamen Rider Drive when he uses the Shift Rolling Gravity Car to activate the Rolling Gravity Tire, which can also be combined with the Rumble Dump and Spin Mixer Tires to create the Kouji Genbar Tire via Type Tridoron's Tire Blending ability.

It can also be accessed by Kamen Rider Mach if he inserts the Shift Car into his Mach Driver Honoh to activate the Kourin Signal Tsubusu. Ultimately, however, Mach was never shown to use this ability.

As the name implies, the 10-ton Weight is very heavy due to the G-Press Metal (G-プレスメタル, Jī Puresu Metaru) that makes up the casing of the weapon. As such, during its first outing, the 10-ton Weight was difficult to be used as a normal weapon, to the point where Drive struggled to even lift it off the ground, because Drive wasn't strong enough too carry it. However, in later instances of using the 10-ton Weight, he can wield the 10-ton Weight with relative ease.

When tossed, the 10-ton Weight forms an intense gravitational well in an enlarged shape of the weapon, slowly pulling the target to the ground from the increased gravity.

In Rolling Gravity's variant of the Door-Ju's Full Throttle finisher PerfecShot (パーフェクショット, Pāfeku Shotto), Drive fires a ball of energy resembling the 10-ton Weight, which flies over directly above the enemy and pelts them with a series of bullets before the energy construct falls like a rock, detonating as it hits the target. 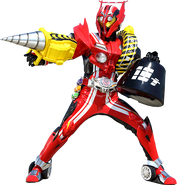